Willow Smith Family Members and  Net Worth – Willow Smith is an American actress and singer who has a net worth of $4 million dollars. Born on Halloween in Los Angeles, California, in 2000, Willow Smith is the daughter of Will Smith and Jada Pinkett Smith.  She first appeared onscreen in “I Am Legend”as Marley Neville with her father in 2007 and later as the voice of Baby Gloria in “Madagascar: Escape 2 Africa”. 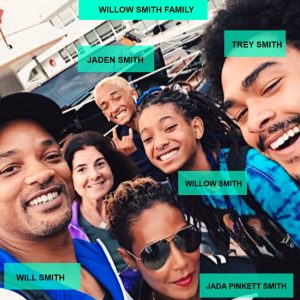 She is better known for her singing career, with her first single, “Whip My Hair”, reaching number eleven on the U.S. charts and number two in the U.K. The single eventually went platinum in several countries, including the United States and Australia. Her follow-up effort, a duet with Nicki Minaj, failed to chart. As of 2014, Smith has released several singles, including “Do it Like Me (Rockstar)”, “I Am Me”, “Sugar Spice”, and “Drowning”, but has yet to drop her debut album. She has been featured on a couple of songs, including “Find You Somewhere” on “The Cool Café: Cool Tape Vol. 1” and “Kite” with her brother, Jaden Smith.

Smith won a Young Artist Award in 2009 for her performance in “Kit Kittredge: An American Girl” and a BET YoungStar Award for “Whip My Hair”. In 2014, her video for “Whip My Hair” recorded more than 100 million views online.

It’s not easy to be a teenager, but it’s even harder if this young person is a kid of famous people. But Willow carries this burden graciously. She creates her life and career with her own hands. And yes, she is very proud of her talented family. 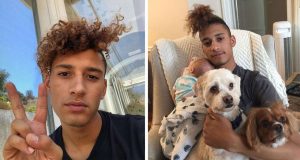 The young artist Tyler Cole and the beauty Willow Smith (who takes the stage moniker Wilough from time to time) collaborated on the song “Fools” together. From that moment they started dating and till now remain one of the most beautiful young couples in show business.

Tyler prefers to call himself “a creator”. He likes creativity in all its kinds and does a lot of things – he sings, acts and makes other art experiments.

Willow’s boyfriend was born in USA. He was inspired to become an entertainer at a high school age. The boy used an actor Childish Gambino as his role model, because he never stopped on any particular kind of art and followed multiple passions. Cole studied drama and film making in a high school. He fell in love with music a little earlier – in the middle school. There the boy played the guitar with his friend. Later they transferred to different schools, but remained friends and continued writing and playing music.

He gained some recognition in 2017, when released the single “Blow Up Your TV!” A little earlier the talented teenager presented his first album, titled “Stranger”. In 2017 he released his second disk.

In spite of the fact that Tyler Cole is very productive as a musician, he doesn’t dream about Grammy. But in five years from now he plans to get an Oscar.

As for screen works, Cole starred in Michelle Opitz drama “Between the Miles”.

When the young man is free from his numerous upcoming projects, he strolls around LA with his beautiful girlfriend Willow Smith.

Who are Willow Smith parents? 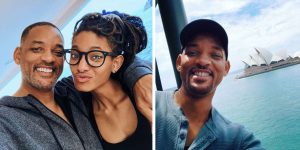 There’s no need to introduce Willow Smith father Will. Probably, his name is known to anyone on the planet. The man starred in numerous films, most of which became hits just because his name was written on the poster.

The talent of Willard Carroll Smith Jr is proved by a string of awards and nominations – he is a happy holder of Grammy, is an Oscar and Golden Globe nominee.

The actor was born in Philadelphia, Pennsylvania. He grew up in the family of an engineer (father) and a school teacher (mother). He has three siblings. When the future movie star was 13, his parents divorced. But that didn’t influence the teenager – Smith remained optimistic, humorous and full of energy. 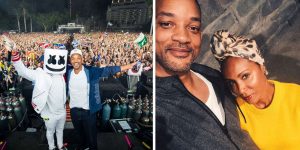 Will was an A-grade student at a high school and got a scholarship into Massachusetts Institute of Technology, but he declined the offer as he didn’t plan to get college education. At that time Will had already fell in love with music. With the company of his friends he founded the band “DJ Jazzy Jeff & the Fresh Prince”. As the part of the band, Willow’s father got his first award – the Grammy.

He broke into television with the main role in the series “The Fresh Prince of Bel-Air”. Will looked very natural on the screen, probably, because the story of his hero resembled his own one. He depicted an ordinary boy from Philadelphia, who came to Beverly Hills. For this role the young actor got Golden Globe nomination. He proved his position of a Hollywood star in 1995, when he participated in the movie “Bad Boys”.

As for now, Will Smith is 49. He still holds position of a solid Hollywood star and talented singer. In addition, Mr. Smith gained reputation of a family man. He was married twice – to Sheree Zampino- Fletcher, an occasional actress, but they divorced after 3 years of marriage. In 1997 the actor went down the aisles for the second time – with an actress Jada Koren Pinkett. Till now they are in love with one another. Jada and Will built a strong creative family and gave a birth to Willow and her brother Jaden.

Willow Smith parents are involved into a number of charity activities. They care not just about their own kids, but also about children of other people –Smiths build schools and make donations to help those, who are not so lucky. 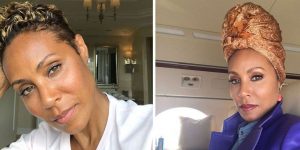 Willow Smith adores her father, but like any girl she is very close with her mother. Jada teaches her daughter not just to act and to sing, but also to be self-confident and to care about herself. Like a mother of three (she brought up her husband’s son from a previous marriage too), Jada knows, that it’s so hard to keep a balance between family life and self-realization.

Jada Pinkett grew up in the family, which had nothing in common with art. Her mother Adrienne was a nurse and father Robsol Pinkett was a builder. Her parents divorced, when Jada was very small, and from that moment she spent most part of her time with her grandmother in Maryland. She has a younger brother Caleeb Pinkett.

In her teen years Jada got interested in art. She convinced her mother to send her to Baltimore School for the Arts. There she met her first love – Lesane Crooks, who glorified his name as a rapper Tupac Shakur. He was tragically killed in late 1996.

Jada parted her way with Tupac much earlier his unexpected death. She dropped out college and went to LA to start career of an actress. She visited numerous auditions and at one of them met an actor Will Smith. He had already become a star, and a young unknown actress Jada looked at the celebrity with her eyes wide opened. Will fell in love with her and on the last day of 1997 they tied a knot. Not long ago the couple celebrated their 20th anniversary – an unbelievable event for Hollywood. Will congratulated his better half through social media. He wrote, that he “was happy to help his wife blossom”.

The role of Will Smith wife is the main but not the only one in the woman’s life. She is also known by her roles in the films “Set It Off”, “The Matrix Reloaded”, “The Human Contract” (which she directed) and others. She launched her clothing line and released a book “Girls Hold Up This World”.

Trey is Willow’s older half-brother from her father’s side. His birth name is Willard Carroll Smith III. The boy was born in the family of Will Smith and his first wife Sheree Zampino. He was 3 years old, when his parents split. But Mr. Smith remained close with his son. Later Trey became the part of Will and Jada family. His father’s new wife accepted the boy with an open heart and made friends with him.

Trey tried his hand in entertainment industry at a very early age. He acted opposite his father in a music video “Just the Two of Us”. Obviously, Will Smith loves his son to death. He named his company after his first child – Treyball Development Inc.

The boy spent his early years like a typical teenager. He studied at Oaks Christian High School and gained a reputation of a sports enthusiast. The teenager even thought about becoming an American football player.

Currently Trey Smith is known as a DJ. He performs under the moniker “AcE”.

Like a real tender princess, Willow Smith is surrounded by two defenders – her older brothers. The girl is in good terms with Trey. And she is even closer with Jaden.

The talent of Jaden Christopher Syre Smith isn’t necessary to prove – his works tell instead of words. To his 20th anniversary he had already starred in the movie “The Karate Kid”, where he acted opposite legendary Jackie Chan, and in “The Pursuit of Happyness”, for which the boy got his first MTV Movie Award.

In fact, Jaden literally had no choice – he had been prepared to the work of an artist since the earliest age.

The boy attended New Village Leadership Academy, founded by his philanthropic parents. Then he left public school and continued to study at home. In his young years Jaden took music lessons and performed at charity events and concerts, which were the part of Project Zambia, targeted to support African kids, whose parents died from AIDs. Such events helped Jaden develop his natural talent. Of course, his parents trained him a lot and gave useful advice.

Jaden debuted on the big screen at a kindergarten age – then he played an occasional role in the series “All of Us”. He portrayed small Christopher in “The Pursuit of Happyness” and made the world speak about him.

Nowadays Jaden is a handsome young man, who develops as an actor and a musician. One of his latest big screen projects is a futuristic film “After Earth”, where again he co-starred his father. Their duo was right again – the movie grossed more than $240 million in the box office.

Jaden performs as a musician too. In 2010 he collaborated with Justin Bieber, and they released a single “Never Say Never”.

Although the young man tries to keep his personal life in secret, some rumors about his girlfriends occur from time to time in press. Previously, he was romantically connected to a model Kendall Jenner (Kim Kardashian sister). But he denied that they were an item. Nowadays Smith Jr dates a high school graduate Odessa Adlon. They attended her prom together.