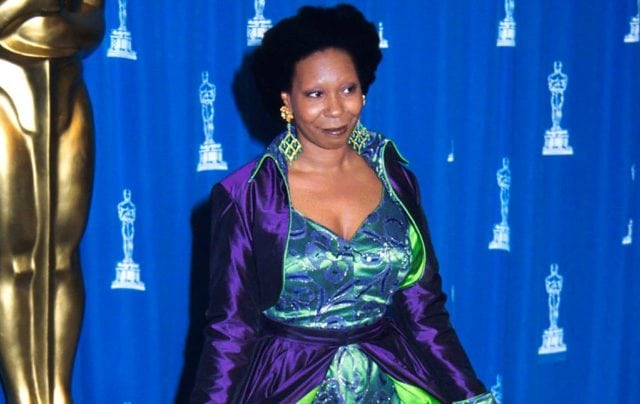 Whoopi Goldberg Net Worth – Academy and Grammy Award winner, Whoopi Goldberg is an actress, comedian, writer, and television host who has been in the entertainment scene since the 1980s. 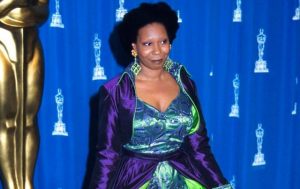 Goldberg was born Caryn Elaine Johnson on November 13, 1955, in the United States, New York City to be raised by her single mother who did an excellent job of grooming her into the popular actress she is today.

She was raised alongside her brother after their parents got divorced and the father abandoned them with their mother.

It is interesting to note that her father Robert James Johnson Jr. was a clergyman. Her mother, Emma Johnson, on the other hand, was a nurse and a teacher.

Caryn Elaine Johnson chose to change her name later in her life to Whoopi Goldberg because she found the former rather boring.

For her education, the actress attended a Catholic school and was also said to have dropped out of Washington Irving High School.

She went on to attend the Tisch School of the Arts and HB Studio which is a drama school.

Whoopi Goldberg has been in a number of relationships and has been married more than once before. The first time she got married was in 1973 when she tied the knot with Alvin Martin.

Unfortunately, by 1979, the marriage ended in a divorce, having produced a daughter, Alex Martin whom she gave birth to in 1973.

By the 80s. Whoopi had healed from her previous marriage and was ready to give love another trail. She married Cinematographer, David Claessen in 1986, but that would only last until 1988 when it ended in a divorce. Next came Lyle Trachtenberg in 1994, but only a year later, the ship had hit the iceberg and it sunk.

Since the end of the marriage in 1995, Whoopi has not been married again. According to her, she is responsible for all her failed marriages because she never gave enough in all her marriages because she has never truly loved before, and she saw that she was not cut out to be in a relationship.

Nonetheless, she has dated a number of men including David Schein whom she dated as far back as the 1980s, Eddie Gold, Timothy Dalton, Ted Danson, Jeffrey Cohen, and Frank Langella whom she had dated from 1995 to 2000.

Even as one may expect that she will have a number of kids from three marriages, Alex Martin is the only daughter she has. Through her, the actress now has grandchildren. 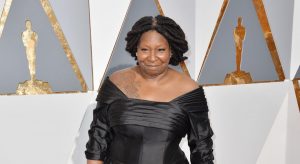 The big screens came calling on young Whoopi with her first movie role with an appearance in the 1982 movie Citizen: I’m Not Losing My Mind, I’m Giving It Away.

Her first big role came in 1985 when she starred in The Color Purple. In the same year, she scored big when her The Spook Show was taken to Broadway as Whoopi Goldberg, an Original Broadway Show Recorded and Broadcast on HBO. She starred in it and was awarded the Grammy for best comedy recording.

Without any doubt, Goldberg is in a class of her own as an actress and a comedian. A very hard working individual who has taken a part in many movies, one will naturally expect her to have a massive net worth. Well, she does.

She has a net worth that is estimated at $45 million. This is not surprising if you consider that at a time in the 1990s, she was the highest paid actress in the world.

Shortly after her rumored net worth was released, the actress sold her property; the pink Pacific Palisades mansion.