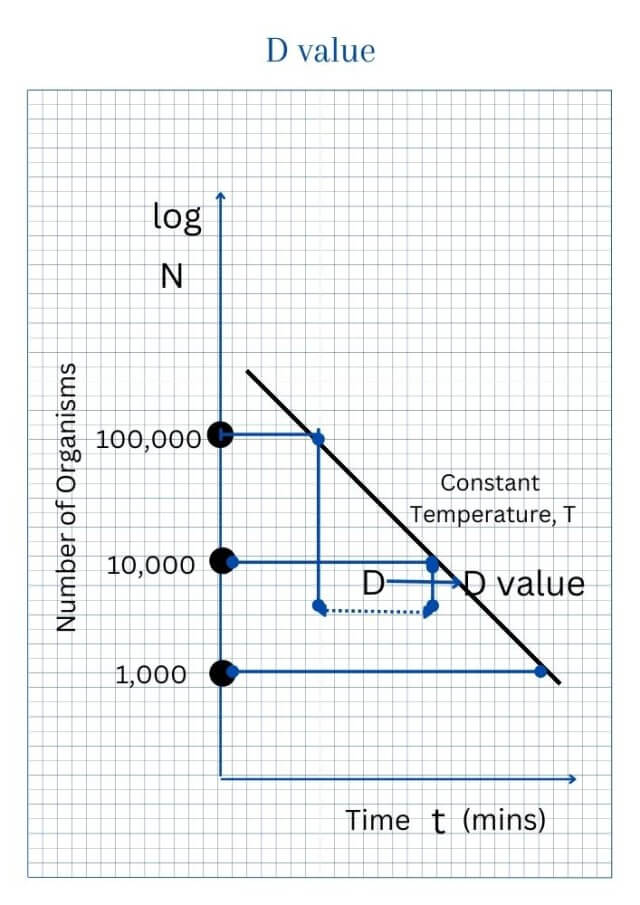 What is DRT curve?

DRT curve or Decimal Reduction Time is the heating time in minutes at a constant temperature that will result in reducing the microorganisms by a factor of 10. It is also known as the D value.

This tutorial will examine the DRT curve (D value), a characteristic of microorganisms’ thermal destruction.

How to obtain DRT curve?

So, if we take a homogeneous suspension of microorganisms and heat it at a constant temperature, we have the microorganism logarithmic order of death.

Now, we say commonly because certain variations are also observed. So, let’s plot the number of microorganisms per unit volume, N versus Time, t. When we heat microorganisms in this unit volume at a constant temperature, we will obtain an exponential plot, as shown in Figure 1 below.

This is an exponential decrease; we also call it a Survivor curve. Survivor curve, because the points on this curve represent survivors at any time when the suspension is being heated at a constant temperature.

If we plot that survival curve, we will notice that we get a straight line. As seen in the plot above, the time required for one log cycle reduction is the D value. The D value or DRT curve is obtained from the x-axis, where the unit is in time, t. So, the D value (DRT curve) is called the Decimal Reduction Time.

We can also say that the D value is the time for the survivor curve to traverse one log cycle. So, the D value remains the same for each of the log cycles on this curve. Thus, as we observed before, the reduction is by a factor of 10 from 1,000 to 100.

We can also observe from Figure 3, that if we were interested in finding the time it requires to decrease the microbial population from 100,000 to 1000, we need to heat that suspension at that constant temperature twice the decimal reduction time. So, the process will be two multiplied by D.

Why can’t we use spectrophotometers for DRT curves?

DRT curve = Decimal Reduction Time (the time it takes to reduce 90% of the population at a given temperature or by a factor of 10)
We can’t use spectrophotometers for DRT curves because they would not distinguish between the live and dead cells. Dead cells block light rays from the bulb as heat doesn’t lyse cells.

How do you calculate the decimal reduction time?

What would account for plateauing of the DRT curve?

Endospores would account for plateauing of the DRT curve because they are heat resistant.

2 thoughts on “What is DRT curve? Decimal Reduction Time”