Suzanne Somers Net Worth – Suzanne Somers is a prolific American actress and singer who rose to superstardom following her wonderful performances in the television sitcoms Step by Step and Three’s Company.

Interestingly, Somers isn’t just an actress and singer; she is equally an entrepreneur and acclaimed author. She has written many books including two autobiographies as well as a book of poetry.

Others are four diet books and her best-selling self-help book titled Ageless: The Naked Truth About Bioidentical Hormones. 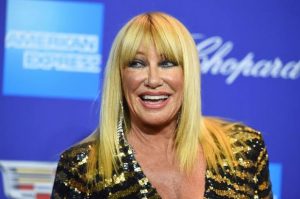 She was named originally as Suzanne Marie Mahoney and was born in San Bruno, California on October 16, 1946, in an Irish-American Catholic family. Her mother was a medical secretary and her father was a laborer and gardener.

She did her schooling at Capuchino High School and did her further studies from San Francisco College for Women. She married Bruce Somers in 1965 and has a son- Bruce Jr., but the marriage didn’t last long and ended in three years in 1968.

Later when she was a prize model on Anniversary Game (1969–70), she happened to meet Alan Hamel- the host and they married in 1977. Alan Hamel has a son and a daughter from his first marriage.

In April 2000, Suzanne Somers was detected with stage-two breast cancer and had to undergo lumpectomy followed by radiation therapy to remove cancer.

Before doing her prominent role as ditzy blonde “Chrissy Snow” in Three’s Company in 1977 she played various small roles like “Blonde in the white Thunderbird” in American Graffiti, in The Rockford Files, in Magnum Force, both in 1974.

In 1980 and 1984 she appeared in Playboy magazines cover in nude pictorials, one of this was to regain her lost popularity after the termination from Three’s company.

She served as a Las Vegas entertainer in the 1980s and in the early 1990s, she also appeared series of infomercials as a spokeswoman for the Thighmaster, which is a piece of exercise equipment.

After this, in 1987 she bagged a role and starred in the sitcom “She’s the Sheriff”, which ran for two seasons. In 1991 she appeared in step-by-step. Suzanne Somers also co-hosted a show called “Candid Camera”.

“The Blonde in the Thunderbird” is a one-woman show in which she has showcased a series about her life and career, due to poor responses and disappointing ticket sales the show was called-off in less than a week’s time.

She also took part as a contestant in the 20th season of Dancing with the Stars with her pattern being the famous professional dancer Tony Dovolani.

She has been a promoter of bioidentical hormone replacement therapy and has received severe criticism from American cancer society for promoting alternative cancer treatment.

Suzanne has a hefty amount of net worth which is reportedly$110 Million as of 2019. Moreover, she has garnered this tremendous amount of wealth from her long career as an actress, author, and singing profession.

From her colossal fortune, she has lavishly maintained her lifestyle. Furthermore, she earns from other notable works too.

Besides acting her salary comes from cameo appearance, endorsement, & Sponsorship deals. Similarly, her husband is also a millionaire.