Supa Peach Net Worth – Supa Peach may have earn herself the platform to show off her multiple talents in the public eye but her controversy-plagued career will not be forgotten in a hurry by so many people, especially her co-contestants at The Rap Game competition.

Supa Peach’s real name is Peaches. She is said to have derived her stage name from her real name. The rapper is also called Peachez by her friends. She was born on March 7, 2003, in the British Virgin Islands to Josetta (mother) and a father whose name is not known to the public. She is an American by nationality and belongs to Afro-American ethnicity.

The American performer was raised with her older sister called Precious Peach and a twin brother. Her family moved from the British Virgin Islands to Puerto Rico, where she reportedly had her high school education. Currently, she lives in Atlanta with her family, including her sister Precious, who is also her manager. She has a niece known as Mini Peach, who according to reports, is also an internet personality.

The social media sensation could possibly be single. She has been very secretive about her love life and this has not been helpful. Although some sites reported she was previously in a relationship but called it quits after her boyfriend cheated on her, there’s no authentic evidence to prove this claim though. More so, the name of her so-called ex-boyfriend is yet to be revealed.

While the multi-talented superstar may be young to have her own boyfriend, her fans are already looking forward to seeing her prince charming. Peach’s singlehood, however, doesn’t in any way suggests she is a lesbian. No! her sexual orientation is straight – so disregard any information that insinuates otherwise. 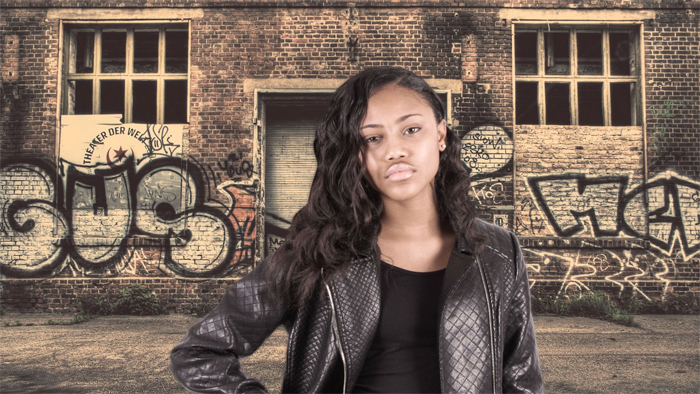 Before fame, Peach was involved in so many things – she severally participated in talent hunts shows and also performed at parties, birthdays, and other social events. She was also a notable face on several social media outlets, including Snapchat and YouTube, where she had over 176k subscribers on her channel named: SupaPeachworld. Her popularity also extended to Instagram and Twitter, where she had 611k and 26k followers respectively.

Peach was thrust into an immense popularity in 2016 after she was selected to participate in The Rap Game, a lifetime reality show which was organized with the aim of giving the winner a chance to be signed by American rapper Jermaine Dupri’s recording label, So So Def.

In the course of the reality show, precisely in its first season, the YouTuber had a fall-out with one of the contestants. The bone of contention that Supa drew so much attention to herself. Her rival – Miss Mulatto – eventually won the competition but not without a hot argument that almost led to a physical fight with Supa’s family members. While Miss Mulatto was 17 at the time, Peach was 12. The former is said to have accused the latter of not writing her songs on several occasions but Peach insisted that she writes her songs and that her mother helps her out too. Her claim led to Miss Mulatto’s father saying that he doesn’t help her daughter on writing her lyrics. And when Dupri intervened, he pointed out that whoever writes the lyrics for the girls doesn’t matter as long as they sing and perform well.

Well, Supa ended up losing the trophy to Miss Mulatto and also earned herself so many negative statements from viewers and critics on social media. While answering questions afterward, she said she is ‘cool’ with her co-contestants and that she replies her fans’ messages whenever it’s convenient for her, admitting before her host that she learned a lot of things at the show and that she will continue to work on herself.

Besides Supa Peach’s messy outing at The Rap Game, she is a wonderful artist and internet personality. She began performing before she turned 10 – she raps, sings, dances, and also has a strong fan base within the entertainment circle. She also banks as a model and has two hit singles to her name.

The budding star dropped her first single titled: Run it in June 2016 while the second one was released in August 2016. Titled Pretty gang, Peach’s second single was produced by American Grammy Nominated record producer, James Worthy.

There is no definitive information regarding the net worth of Supa Peach. However analysts have made claims that considering the time despite how short she has been in the music world, she is fairly popular. She has already launched two of her albums and has been even performing for events in her local area. Considering all of this, she must have a net worth of couple of thousand dollars to her name.