Sam Asghari Family Members and Net Worth 2019 – Widely known as a model, actor and handsome boyfriend of Britney Spears, Sam Asghari has both, Persian and American, roots (which, probably, explains his hot looks). He was born in an Iranian capital – Tehran – and moved to Los Angeles at the age of 12 to start the career of a football player. He joined his father Mike, who resided in the USA for about 10 years before Sam’s joining him.

The boy was accepted to the University of Nebraska-Lincoln and he studied there for a year and played for the football team, till he was expelled. After that Sam settled in a rented apartment in LA and worked at 3 jobs simultaneously to make the ends meet. Because of insomnia and constant stress he gained extra weight.

Then Asghari put himself together, lost about 100 pounds and took a course “Gold’s Smart Nutrition”, after which he began to work as an individual trainer and nutrition specialist. His older sister Farzaneh, impressed by his shaped new body, recommended him to her friend, a fashion designer Michael Costello. Thus, Asghari started modeling and occasional acting, which led him to the set of Britney Spears’s music video.

Now he continues working as a fitness model and actor and plans to move to the big screen. He is terribly in love with Britney, and their friends don’t exclude the possibility of the wedding between the two. 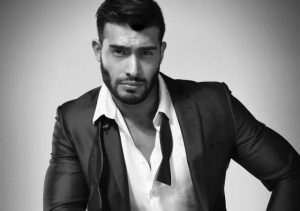 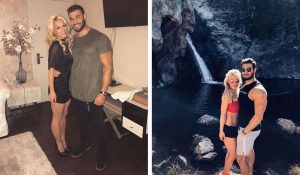 In spite of the age difference (Sam is 13 years younger than his girlfriend), he never gets tired to tell, that Brit became a real blessing for him. He is admired by her beauty, charm, and talent.

Sam met “the most talented artist of all times”, as he names her, at the set of her music video “Slumber party”. Asghari, who had already started the career of a model and even appeared in Toyota Prius commercial, got an invitation to participate in a new music video of the singer. He put aside all his other projects and immediately appeared on the set. He loved Brit at first sight and felt awkward in her presence at first. But then they started talking and exchanged phone numbers at the end of the shooting process. Then they went for a sushi date (the famous photo of the couple in the sushi bar still can be found in net) and gradually were involved in new relationships. Now Sam is not just Brit’s boyfriend, but also her friend and personal trainer. Their common workouts very often appear on Instagram.

His father is of American origin, and his mother has Persian roots. They were raising four kids in Tehran, Iran, and Sam was the youngest of them and the only boy. Asghari family was very poor, so Mike, the boy’s father went to the USA to try some other turf. He worked as a tow truck driver and sent the major part of his salary to his wife Fatima and kids.

In his teens, Sam fell in love with sports and practiced football a lot. He thought about making the career of an athlete. When the boy turned 12, his mother Fatima made a hard decision – she sent her son to the USA to live with his dad.

In his recent interviews, the young man never gets tired to thank his mother and father for all they did to help him realize his dreams. 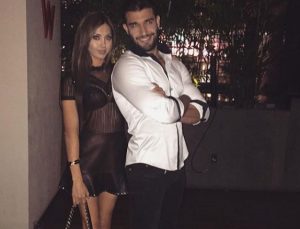 Faye is Sam’s older sister. She left her hometown for Los Angeles, too. There she worked as a nurse and then started the career of a model. She collaborated with a fashion designer Michael Costello, and recommended her younger brother Sam to him. Thus, Britney’s boyfriend started modeling.

He has two other older sisters, Maddy and Ellie. Sam tells that his main aim is to support his sisters and parents financially. He feels responsible for each member of his family.