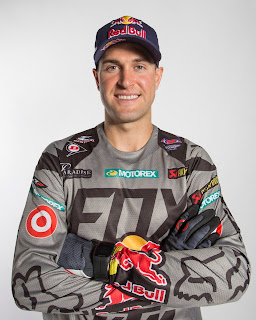 Talented Ryan was born on the 4th day of December 1989 in Belle Plaine, Minnesota, and attended the Guardian Angels Catholic School in Chaska, Minnesota, United States. He lived with his father (Troy Dungey) and mother (Michelle Dungey), and two older brothers – Blake Dungey and Jade Dungey.

Ryan Dungey got married to his then-girlfriend, Lindsay Dungey, in 2014.

At the beginning of his career in 2007, Ryan was one of the few professional motocross athletes to turn pro directly from the “B” class in amateur racing. Not developing in the mini classes, Ryan trained with Aldon Baker and was mentored by Red Bull KTM team manager Roger DeCoster.

Thus, once on the full-size bikes, he started to improve to the point of winning races.

He then went on to win every major title in American Motocross and Supercross including the world’s largest international motocross race – the Motocross des Nations three times. He then capped off his amateur career by winning the 2005 Loretta Lynn’s Amateur Championship.

Ryan’s first full year in the professional ranks started in the 250 East Supercross. No one expected much from the No. 62 factory Suzuki rider; and it wouldn’t be the first time that he would be underestimated.

After Ryan won his first ever professional Supercross race, he struggled for the rest of the Supercross season to replicate the form that saw him crowned as champion – either winning or going down trying. He still got recognized by being named 2007 Supercross rookie of the year.

In 2009, Ryan witnessed what became one of the most remarkable seasons of his professional career: setting him on the path to becoming one of the greats of Motocross/Supercross.

Team United States was not expected to be competitive in the 2009 MXoN due to A-list riders James Stewart and Ryan Villopoto being out with injuries. Ryan, having never raced a 450cc bike was then nominated as team captain and entered the premier MX1 (450) class.

In a contest that came down to a battle of pride between team US, powerful French team and host Italian teams, Ryan historically came 1st in the final moto, securing the USA’s 20th MXoN victory.

When Ryan joined De Coster of KTM in 2012, they literally built a production bike to his liking for the 2012 AMA Supercross. Ryan placed 1st in four of the Supercross events.

He then put in a stellar performance at the outdoor MX; placing 2nd to James Stewart in rounds 1 and 2, finishing the season with wins in 19 of the final 20 motos and 10 overall wins. This helped him earn his second outdoor title in the 450 class with two rounds remaining.

If 2009 was anything to go by as with Ryan’s historical records, then 2017 marked the most hard-fought battle ever against the super-fast Eli Tomac.

Ryan announced his retirement from the AMA Championships.

In all, Ryan Dungey has seven major AMA championships and holds the record for consecutive podium finishes in Supercross.

Ryan Dungey has a net worth of $8 million.