Starting his acting career playing the role, Dr. Jeff Webber in the soap-opera series General Hospital, the actor reached the pinnacle of his career appearing as the lead actor in the TV series MacGyver from 1985-1992. 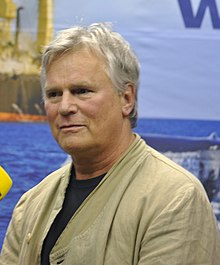 Richard Dean Anderson was born on January 23, 1950, in Minneapolis, Minnesota of United States. He is the son of  Stuart Jay Anderson and Jocelyn Rhae Carter. His father worked in the insurance company and his mother was a home maker.

Anderson spent most of his early days growing up in Roseville, Minnesota along with his siblings James Stuart, Thomas John, and Jeffrey Scott. He holds an American nationality and as far as his ethnicity is concerned, he has a mixed ethnical background as he is of Mohawk, Norwegian, Scottish, and Swedish decent.

Richard completed his schooling from Alexander Ramsey High School. As a child, he was planning to establish his career as a professional hockey player unfortunately, he broke his both arms. And later he changed his mind in the field of musical and acting. He also tried for a while to become a jazz musician.

to pursue his career in the field of acting, Anderson weon on to join the St. Cloud State University. After that, he attended the Ohio University but before receiving his degree he drooped out.

Just after his sophomore year in college, he went on to participate in a cross-country bicycle ride along with his friends from Minnesota to Alaska.

He subsequently featured as a Adam in the CBS TV series Seven Brides for Seven Brothers for a year from 1982-83.

The actor first came to limelight and gained worldwide fame after he landed his role of Angus MacGyver in the highly rated TV series MacGyver alongside Richard Dean Anderson, Michael Lerner, and Dana Elcar.

His popularity gained further attention following his greatest performance in Stargate SG-1 in which he shared the screen along with Kurt Russell and James Spader.

In the year 1995, the actor featured in a comic series of only twelve episodes about a dime novel Legend.

He reprised his character of Angus MacGyver in a MasterCard commercial during Super Bowl XL in 2006. He has also portrayed General Jack O’Neill in Stargate Atlantis and Stargate Universe which premiered for the first time in October 2009.

Richard Dean Anderson has a net worth of $20 million dollars.