Olivia Harlan Net Worth – Olivia Harlan is an American Sports Reporter. People mostly recognize her as the reporter of the ESPN and the SEC Network.  Additionally, she has also served as the traveling sideline reporter for the NBA’s Atlanta Hawks. 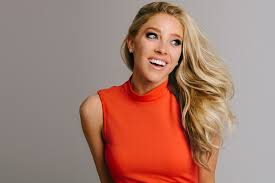 Harlan was born in Kansas City on April 9, 1993. She is the daughter of CBS and TNT play-by-play commenter, Kevin Harlan. Additionally, she has three siblings, Abigail, Rob, and Haley Harlan Mancuso.

She is the granddaughter of the former Green Bay Packers President and CEO, Bob Harlan. She is of American nationality. Furthermore, there are no details available relating to her ethnic background at present.

Talking about her education, Harlan attended the University of Georgia. Additionally, she obtained a degree in Digital and Broadcast Journalism from Grady College of Journalism and Mass Communication.

Olivia Harlan is currently in a relationship with professional American basketball player Sam Dekker. The pair has been dating since 2016. They decided to take their relationship to the next level after they got engaged on May 26, 2017. Additionally, they later married on July 15, 2018. 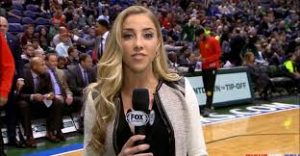 Harlan initially worked as a football reporter for the college team, Bulldogs. In addition, she won the Miss Kansas Teen USA contest in 2010. Harlan served as the co-host on a daily web series for Green Bay Packers camp during 2013. Furthermore, she was also a correspondent for SEC and ACC football for Fox Sports South and Raycom.

Harlan joined ESPN in 2015 as a sideline reporter for college football games. Additionally, is also the host for ‘ACC All Access’ on Fox Sports. Presently, she manages her three jobs at once.

Harlan has not revealed her current salary. Additionally, there is no information available about her estimated net worth at present.

There was a rumor going on recently which suggested that Harlan might get married soon. This rumor later turned out to be true. At present, there are no rumors concerning Harlan and her career.