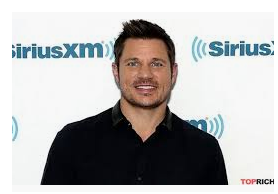 To call him Nicholas Scott Lachey would have been a mouthful from a marketing perspective, so he became Nick Lachey, but his loving parents, John Lachey and Cathalyn were not thinking about the market influence when they welcomed their child on the 9th of November 1973 in Harlan, Kentucky.

Nick was born into a family with different ancestral origins. He is part English, Scottish, Irish, German, Dutch, Welsh and French. A prime example of a world where we loved each other without discrimination.

Before the American singer would go into the world and sing in front of thousands of people, he first had to recite homework in front of his classmates at Clovernook Elementary School in Ohio.

After graduation, he committed to life as a creative artist and attended the School for Creative and Performing Arts in Cincinnati. His educational journey also took him to Miami University in Ohio and the University of Southern California in 1992.

Nick Lachey has been married twice so far; his first marriage to Jessica Simpson didn’t take and the two broke up in one of the most popular divorces in modern history on June 30, 2006.

Not one to give up on love and the marriage institution, Nick gave marriage another chance with Vanessa Minnillo, an actress, and model who starred in one of Lachey’s music videos. The two hit it off while on set, started dating and got married on July 15, 2011.

They currently have three children – Phoenix Robert Lachey, Brooklyn Elisabeth Lachey, Camden John Lachey who were born in 2016, 2015, and 2012 respectively.

As for his extended family, other than Drew Lachey, who is his brother and a member of the 98 Degrees music group, not much is known. His parents are Cathlyn Lachey and John Lachey.

After completing his formal education voyage, he began a professional music career in the mid-90s with a friend, Justin Jeffre who together, they started a quartet that sang at Kings Island in Ohio. The quartet consisted of Nick Lachey, Justin Jeffre, Jeff Timmins and Nick’s brother, Drew Lachey.

The four of them eventually grew beyond the park and formed a boy band called 98 Degrees, releasing their first album, the eponymous named 98 Degrees.

The band got its big break with their sophomore album, 98 Degrees and Rising which propelled them onto limelight selling over 10 million records.

As a solo artist, Nick Lachey has four solo albums to his name; he released the first, SoulO in 2003. Although the first album was a commercial failure, Nick did not give up and he finally found success with his second album, What’s Left of Me. The album was released in 2006 and was certified gold by the RIAA after it sold over 500,000 copies. He has released two other albums after – A Father’s Lullaby in 2013 and Soundtrack of My Life in 2014.

On television, Nick Lachey has featured heavily in several television programs; his first was a reality television show titled Newlyweds: Nick and Jessicastarring him and his wife at the time, Jessica Simpson on MTV.

The show won a People’s Choice Award and ran from 2003 to 2005. Since then he has appeared in other shows like One Tree Hill, Twins, Hawaii Five-0, among others. Other reality television shows credits include The Sing-Off, Dancing with the Stars, Clash of the Choirs, among others.

He has won a few awards in the two decades of his professional career, which include MTV Video Music Awards, ASCAP Pop Music Awards and two nominations from the American Music Awards.

Nick Lachey is one of America’s most successful Music artists and television personalities, he has over 10 million record sales to his name and multiple charting solo albums. He has 28 television credits to his name, including a couple shows as host.

As part of a group that sold over 10 million records with some success of his own as a solo artist and a career as host of multiple television programs, Nick Lachey has been able to build a sizeable net worth of $20 million.

As a wealthy man, he has taken it upon himself to give back to the less privileged as a member of the Entertainment Council of Feeding America, a hunger relief organization.