Miranda Kerr Body – Miranda Kerr is an Australian model known for several reasons but our favorite reason is David Kiely. The man, who was working at Sydney’s Macquarie Bank was nabbed on live television helping himself with explicit pictures of Miranda in 2010. While David’s colleague was being interviewed, he was spotted in the background doing his thing.

Anyway, if you have ever wanted to have Miranda Kerr’s story told from an interesting perspective, here’s your treat! From her biography to details of her love life, her husband, son, net worth, height and body measurements, you will find most of the things you desire to know about the Aussie model here. 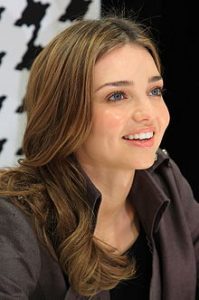 She was born Miranda May Kerr on April 23, 1983, to her parents Therese and John Kerr, in Sydney, Australia. Kerr grew up with her parents in Gunnedah, New South Wales. After her family moved to Brisbane, she enrolled at All Hallows School.

As early as the age of 13, her interest in modeling already began to manifest. She won the 1997 ‘Dolly’ magazine/impulse model competition and shot for the magazine as her price. Although some backlash followed due to her young age, she remained undeterred. Before she fully ventured into the field Miranda made sure she got an education; she studied psychology and health education.

Chic Management soon signed Kerr, and she started featuring in a series of beachwear commercials. She graced the runways in 2004 when she signed with NEXT Model Management. Some of the brands she worked with include; Baby Phat, Alex Perry, Levi’s, and many others. Miranda proceeded to Maybelline New York in 2006. The following year she signed with Victoria’s Secret and became the first Australian Victoria’s Secret Angel. She rose to popularity after she made appearances in the brand’s 2006 to 2009 televised runway shows which were viewed across the globe. Miranda was the new face of Arden B in 2007 and featured in their campaigns. The following year she was the new face of the Clinique Happy fragrance. She also signed a mouthwatering deal with David Jones that year and became one of the highest earning models at the time.

Kerr in 2009 went nude for Rolling Stone magazine in Australia. This was the brand’s way of creating awareness for the endangered koalas. That same year, she ranked no. 9 on Forbes list of highest paid models in the world. The supermodel signed a new contract with IMG Models in 2004 after she left NEXT. Kerr whose skills shot to prominence also walked for PRADA in 2010 during the launch of their fall collection.

In 2013, Kerr ranked no.2 on Forbes list of highest paid models with earnings to the tune of $7 million. She was made the face of H&M, a Swedish clothing brand, the following year. In July 2014, she became the face of Escada fragrance, Joyful.

In 2015, Miranda in collaboration with Swarovski designed a jewelry line and ranked no. 6 on Forbe’s list of highest earning models that year. In 2017, she appeared in a Buick commercial alongside Cam Newton. She also featured in a Louis Vuitton video campaign in July that year, when the brand celebrated the launch of her new smartwatch.

But their relationship could not flourish and ended during mid-2007. At the end of 2007, Miranda started her affairs with Hollywood actor, Orlando Bloom. Their relationship led themselves to engagement and tied a knot with each other in 2010. He is also one of the prominent actors in Hollywood. They two make a perfectly lovely couple. They have been married for six years and are still doing great in their marital relationship. They look happy in each other’s company, complements and completes each other perfectly. who stepped in the world in 2011In 2011, the couple was blessed with a son.

They named him Flynn Christopher Blanchard Copeland Bloom. She stated that her son’s middle name is a tribute to her ex-boyfriend who died in the car accident while they were still seeing each other. They were only fifteen years old when that tragic car accident happened back then. But the couple decided to part their ways in 2013.

Kerr started dating young snap chat co-founder/CEO billionaire Evan Spiegel in 2015. The happy couple announced engagement in July 2016 and tied a knot in May 2017. Kerr gave birth to her second and first child with Spiegel on 7th May 2018. They named him  Hart Spiegel.

Miranda’s attractiveness has often left many wondering how she could be as charming as she is and what her body measurements are. Sporting brown hair and exceptionally bright blue eyes, Miranda Kerr is 9 inches taller than 5 feet (1.75 m).

While she currently weighs around 120 lb (54kg), other features of her body which have gone a long way to endear her to the modeling world include her 34-23-34 body measurements.

The gorgeous model has always made the Forbe’s list highest paid model for several years. She was enlisted as world’s top-earning models at No.10 in Forbes List in 2008 earning an estimated amount of $3.5 million.

She jumped to No. 2 rank in Forbes list earning $7.2 million in 2013. One rank down, Kerr ranked No. 3 in Forbes List of highest earning models in 2014, earning an estimated $7 million. Kerr made it to rank No. 6 and No. 10 in consecutive years 2015 and 2016. At present, she has the estimated net worth of $12 million. And according to sources, she demands a hefty amount of salary from her employers.