Marilyn Monroe Body – Marilyn Monroe is a singer and actress popularly known as one of the celebrities who pioneered the female sexual revolution in the late 40s. Her blonde hair and sexually provocative movies including Some Like It Hot, Gentlemen Prefer Blondes, and Niagara earned her fame beyond her wildest dream as she became a sex symbol who women loved to hate and men wanted to date. 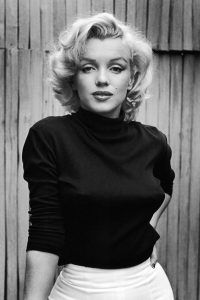 Her most memorable photo was the iconic pose which she did for the hit movie The Seven Year Itch released in 1955. In the picture, she wore a white gown and was standing over a wind tunnel which blew up her skirt.

Marilyn Monroe whose birth name is Norma Jeane Mortenson was born at the Los Angeles County Hospital, on the 1st of June 1926 to mother, Gladys Pearl Baker (née Monroe, 1902–1984). Her father was never in the picture hence the reason Marilyn adopted her mother’s maiden name. Growing up was tough for Marilyn as she had to move from one foster care to the other because of her mother’s sudden mental illness.

She then became a ward of the state which afforded her the opportunity to move in with three different families who later sent her back to foster care. The downside of this was that she was sexually abused in each family she was accepted into. This further made her develop extreme self-consciousness and timidity. 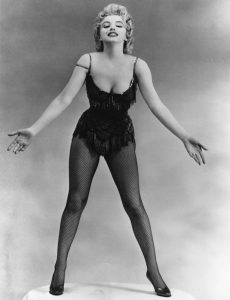 While she was young, she always loved to play house and later found out that she was passionate about it so much that she would be sent off to the movies just to get her out of the home and this is something she loved. After her third foster family didn’t want her anymore, she agreed to get married at the early age of 16 in 1942 in other not to return to being a ward of the state.

She first burst into Hollywood in 1944 through modeling after meeting photographer David Conover while still married to her husband Jimmy Dougherty. Though he didn’t approve, she defied him and went ahead to sign a modeling contract.

At this time, she changed her color from her natural curly brunette to blonde so she could get more modeling jobs. She couldn’t go into mainstream modeling because of her hourglass shape and therefore she was advised to become a pin-up model. Throughout her modeling career, she was featured particularly in men’s magazines.

Her journey into acting started in August 1946, and this was the period when she changed her birth name from Norma Jeane Mortenson to Marilyn Monroe. Her very first movie was Dangerous Years in 1947 and Scudda Hoo! Scudda Hay! in 1948. 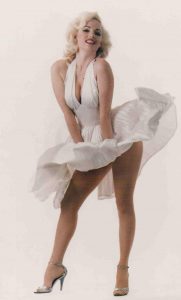 Throughout her career, she was used as a sex symbol to attract more men into the theaters. This was okay by her at the start of her career until when she started craving more serious roles as time went on. However, she only got the chance to do a few serious dramatic roles which were modest hits before her untimely demise in 1962.

It has already been established that Marilyn Monroe was a striking beauty who most women only dreamed of being like. Even in recent times, her iconic hourglass shape and seemingly perfect physique make her a point of reference when it comes to beauty standards. The following are her stats: