Kyle Larson Net Worth –  As a professional stock car racing driver, Kyle Larson is a current competitor in the Monster Energy NASCAR Cup Series for Chip Ganassi Racing and also has a part-time stint in the NASCAR Xfinity Series.

His successful racing career is not without some recognition among which include being named the NASCAR K&N Pro Series East Rookie of the Year in 2012 as well as the champion, the Rookie of the Year in the Nationwide Series in 2013, overall winner of the 24 Hours of Daytona in 2015 and a few others. 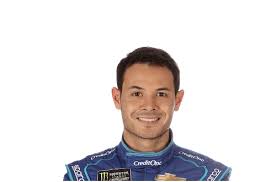 The famous American professional stock car racing driver Kyle Miyata Larson was born in Sacramento, CA on the 31st day of July 1992. His parents are Mike and Janet Larson who have two other children apart from Kyle.

The budding car racer saw his first car racing sports a week after he was born but joined the gang at seven years of age. The records have it that Kyle acquired basic education as he practised his sports. He is reputed to be a caring sort of guy who loves water and hopes to take his family on a cruise.

Kyle started with outlaw karts in Northern California and today, he is currently driving the No. 42 Chevrolet SS for Chip Ganassi Racing and is competing full-time in the NASCAR Sprint Cup Series.

Although he has a sort of limited schedule with Xfinity Series where he drives a No. 42 Chevrolet Camaro for CGR, the car racing star is also into Camping World Truck Series, with No. 24 Chevrolet Silverado as his race car.

Kyle is currently in a relationship with Katelyn Sweet who is a sister to his close friend Brad Sweet, also a race car driver. Katelyn who was born on the 28th of July 1991 is used to being in the limelight because of her brother’s profession, but she is a nice and creative person in her own right.

She has a social media presence through her twitter account that was opened in June 2010. In addition to her social media account, Kyle’s beautiful girlfriend has worked for Rodan & Fields skincare as an independent consultant.

It has been hinted that the couple must have gotten to know each other from their mutual passion which is car racing. Although how they met for the first time have never been discussed, it is very likely to be in one of the after parties and get-togethers for racers.

Their relationship has remained strong, and it seems unshakable. Though they are not married yet, the couple has two kids together, their first child Owen Miyata Larson, a boy, was born on the 22nd day of December 2014 and just recently, on the 7th day of March 2018, their second child Audrey Layne Larson came into the world.

Kyle and his baby mama became engaged on the 22nd day of December 2017, according to the driver of the No. 42 Chevrolet, the marriage proposal has been long overdue.

He posted pictures of him and his soon-to-be official family on the social media with Katelyn brandishing her giant engagement ring as they jet off to New Zealand for the off-season.

The couple appear to be in a great relationship and as Kyle Larson said, it’s about time and they couldn’t wait to spend the rest of their lives together, taking care of their children. 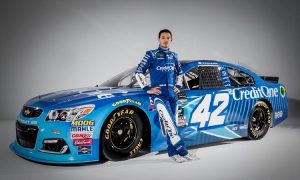 Kyle Larson has won events including the 2011 Belleville Midget Nationals Championship, the 2012 and 2016 Turkey Night Grand Prix, the 2013 UNOH Battle at the Beach All-American, the 2015 Rolex 24 at Daytona, the 2016 Spring Showdown, and the 2016 Aspen Dental Eldora Dirt Derby. 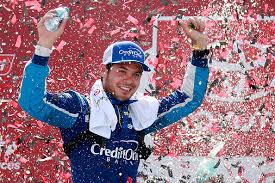 Kyle Larson is an American professional stock car racing driver who has a net worth of $12 million.