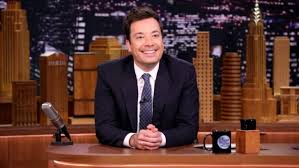 Jimmy Fallon is a New York born comedian, actor and late night host who has a net worth of $60 million dollars. Jimmy Fallon was born on September 19, 1974 in Brooklyn, New York. He grew up in a town called Saugerties, New York. As a child, Jimmy and his older sister re-enacted their favorite scenes from Saturday Night Live for their parents every Sunday morning.

After graduating from high school, his mother encouraged him to try performing at an open mic night at a comedy club called Bananas in Poughkeepsie, NY.

He continued to perform throughout college then moved to Los Angeles to pursue a comedy career full time. In Los Angeles, Jimmy joined The Groundlings improv group where he began to polish a very funny standup act.

This act won Jimmy his dream audition for Saturday Night Live. He was hired as a cast member for the 1998-1999 season 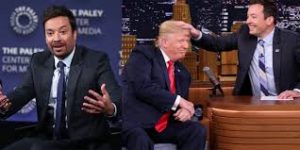 . He remained a cast member of SNL until the 2004 season. After leaving SNL, Jimmy pursued an acting career with movies like “Fever Pitch”, “Factory Girl”, and “Whip It”.

Fallon released the albums The Bathroom Wall in 2002 and Blow Your Pants Off in 2012 which reached #1 on the US Comedy chart and won a Grammy Award for Best Comedy Album. He has also authored the books I Hate This Place: The Pessimist’s Guide to Life, Snowball Fight!, Thank You Notes, Thank You Notes 2, Your Baby’s First Word Will Be DADA, and Everything Is Mama.