He proved himself as an excellent performer through stand-up comedy before moving on to make his mark on television.

Mandel became widely known as the host of the NBC game show Deal or No Deal. He was equally the host of the show’s Canadian-English version (2007) as well as its daytime version. 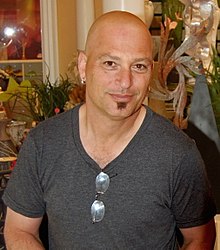 It is known to many that Howie’s place of birth was in the Willowdale area of Toronto, Ontario and, that his date of birth was on the 29th day of November 1955.

He was raised by Jewish parents and also attended Hebrew school. His father was a real estate agent and also a manufacturer of house-fittings.

Mandel had his high school education at William Lyon Mackenzie Collegiate Institute, however, he was expelled before he could complete his studies.

His offense was that he impersonated his high school board and convinced a construction firm to carry out some construction work on his school. That was definitely an unfortunate prank.

Howie Mandel has been married to Terry Soil Mandel for several decades. The couple tied the knot way back in 1980 on March 16. They have 3 children together: 2 daughters Jackie and Riley, and a son named Alex.

His first daughter Jackelyn Shultz was born in 1984. She is a teacher and got married to Alex Shultz on July 22, 2013. Mandell’s second daughter Riley Mandell was born in 1992.

In 2006, she featured as a model on an episode of the game show Deal or No Deal.

Mandell’s son Alex Mandel was born in 1989. Like his father, Alex has towed a career path in showbiz. He is a talented comedian, actor, director, and a YouTube vlogger.

Alex Mandel featured on his father’s syndicated reality series Howie Do It. He also featured in the prank show Scare Tactics (2003) and Destination Fear (2012).

Howie Mandel went on to work as a carpet salesman. He stumbled upon a chance for a showbiz career during a vacation trip to Los Angeles.

He was spotted by a producer while freestyling at The Comedy Store in L.A. He was quickly hired to feature on the comedy game show Make Me Laugh during the show’s run in 1979.

Mandel proved to be an excellent performer and eventually, he graduated from doing stand-ups to featuring on television shows. One of Howie Mandel’s early movie roles was the lead in the Canadian movie Gas.

His acting breakthrough came in 1982 when he landed the role of ER intern Dr. Wayne on the NBC medical drama St. Elsewhere, which also featured Denzel Washington.

The show ended on May 25, 1988, after a successful six-season run on NBC. Mandel also lent his voice to the role of Gizmo in the 1984 hit Gremlins and also reprised his role in its sequel Gremlins 2: The New Batch (1990).

He launched his own syndicated talk show The Howie Mandel Show in 1998, however, the show lasted for just one season.

In 2003, Mandel was considering an early retirement from showbiz when he received the offer to host the NBC game show Deal or No Deal.

He turned it down several times before finally accepting the career-changing role. The role rejuvenated his career and squashed all plans of retirement for Mandel.

In 2007, Mandel hosted a 5-episode run for Deal or No Deal Canada. The talented comedian equally made a guest appearance on an episode of the popular kiddies series Sesame Street (Season 38).

In January 2009, he launched the short-lived NBC reality series, Howie Do It. The talented entertainer and TV host replaced David Hasselhoff as one of the judges on America’s Got Talent in January 2010.

Considering his accomplishments as an entertainer, it wasn’t a surprise when Howie was honored with a star on the Hollywood Walk of Fame; that was sometime in September 2008.

About a year later, he was also honored with a star on Canada’s Walk of Fame in his own home city of Toronto.

Howie is also a writer. He published his autobiography – Here’s the Deal: Don’t Touch Me – in 2009. The book gave an account of his struggles with obsessive-compulsive disorder (OCD) and attention deficit hyperactivity disorder (ADHD).

Howie Mandel is a Canadian-born actor, comedian and TV host who has a net worth of $40 million dollars. For his work on America’s Got Talent, Howie Mandel earns a salary of $70,000 per episode.