Holly Madison Net Worth – Holly Madison is a model, showgirl, television personality, and New Your Times best-selling author. Her own series Holly’s world has 8.1 rating out of 10 in TV.com. Madison is also known for her role in E! hit reality TV show, The Girls Next Door. 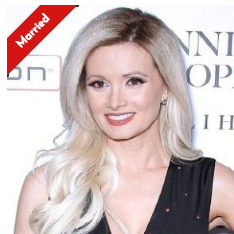 Holly was born on December 23, 1979, in Astoria, Oregon. She spent her childhood on Price of Wales Island in Crag, Alaska. But they returned back to Oregon when she was still in Middle school. Madison was born to Steve Cullen and Patsy Cullen. Her birth name is Holly Cullen. Holly is an American by her Nationality.

Holly wanted to complete her study. To do so, she worked as a waitress at Hooters and competed to become a Hawaiin Tropic Model to afford her college fees and tuition.

Holly is married to Pasquale Rotella, an American Businessman. She announced her engagement to Pasquale on June 24, 2013, via her blog. In August 2012, Madison announced that they were expecting a baby.

She gave birth to their daughter, Rainbow Aurora Rotella, on March 5, 2013, in Las Vegas. After 6 months, they got married at Disneyland on September 10, 2013.

Furthermore, she has announced that they are expecting their second child in January 2016. Soon later, Madison gave birth to their son, Forest Leonardo Antonio Rotella on August 7, 2016.

Due to daily appearances on Hooters and Hawaiin Tropic Model, She was invited to the Playboy Mansion. After one year there, she requested to move in at the age of 21.

The show gained so much popularity that in the November 2005 issue, Playboy published nude pictures of Madison and her co-star. These three stars were again featured on the covers of the September 2006, March 2008, and February 2009 issues.

Madison prioritizes her career producing Playboy spreads. She quit working for the company after her relationship ended with Hugh Hefner in February 2009.

After The Girls Next Door, She did multiple reality TV shows. Madison replaced Jewel Kilcher on Dancing with the Stars and partnered with Dmitry Chaplin.

But there career on Dancing with the Stars didn’t last long after she injured herself while practicing. As a result, Dmitry and Madison were voted off on March 31, 2009, at Double Elimination Show.

Madison along with Las Vegas Mayor Oscar Goodman broke a Guinness World Record for ” Largest Bikini Parade ever” in May 2009. The politician and the former Playboy house bunny aided them.

Then she replaced Kelly Monaco whose three-month contract was up for Peepshow. Madison also had to sign to a three-month contract, but it was extended to a full year due to the show’s success. She left the show after four years due to her pregnancy.

Holly started her own reality show, Holly’s World which is about her life at Planet Hollywood in Las Vegas. She praised her own show mentioning it wasn’t as mean but good-natured like other reality shows.

Holly’s show premiered on December 6, 2009, and it was continued to 2 successful seasons. Madison published her first book and memoir, Down the Rabbit Hole: Curious Adventures and Cautionary Tales of a Former Playboy Bunny in July 2015.

The book details about her life in the Playboy Mansion and the successful step she took after that. The book debuted first on the New York Times Bestseller list.

In May 2016, Madison released her second memoir The Vegas Diaries: Romance, Rolling the Dice and the Road to Reinvention. Madison wrote about her journey toward reinvention and self-acceptance in Las Vegas.

Holly Madison has achieved fame, popularity, and fortune out of her career. But She hasn’t received any awards so far. According to the record of 2013, Holly Madison’s estimated net worth was $6 million.