Hailie Jade Scott Whitney Mathers Net Worth – Hailie Jade Scott-Mathers is the only biological daughter of famous U.S rapper and record producer Marshall Bruce Mathers III popularly known as Eminem had with ex-wife Kimberly Anne Scott whom he was married to twice before their final split in 2006.

You may not have met Hailie Jade Scott-Mathers in person but believe me, you have met her over and over again in her father’s songs, well, that, of course, is if you are a fan of Eminem. 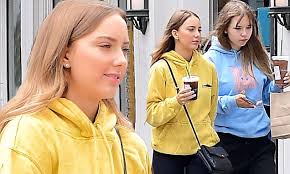 The Grammy Awards winning rapper has rapped about his daughter in virtually all of his songs. He dedicated an entire track “Castle” from his latest album Revival to his daughter.

The song was written in a form of annual letters to his daughter and the rapper gave listeners an insight into his approach to fatherhood. Haven met Scott in the lyrics of her father’s songs, let’s further introduce her to you; her bio, family life and other facts.

Scott was born in Detroit, Michigan on Christmas day (25th December) of 1995. Hailie Jade Scott-Mathers was not homeschooled like many celebrity kids; she attended Chippewa Valley High School, Michigan where she played volleyball and was a member of the National Honor Society. After high school, she headed to Michigan State University, where she bagged a degree in psychology.

She told The Mail in 2017, that she is yet to decide what she is going to do, now that she is out of college. The brunette beauty is however interested in the beauty industry, so we wouldn’t be shocked to see her excelling in the industry in the near future.

As mentioned above, Jade Scott is the daughter of U.S rapper Eminem and his ex-wife, Kim Scott. Kim met Eminem while in high school at a mutual friend’s party while the rapper stood on a table with his shirts off rapping “I’m Bad” by LL Cool J.

They became friends and when he was just fifteen years old, Kim and her twin sister Dawn ran away from home and moved in with Eminem and his mom.

Kim and the rapper began an on-and-off relationship in 1989. In December 1995, they welcomed their first child together, but things weren’t that easy for the couple.

Eminem reportedly had to work sixty hours a week as a cook, dishwasher at a family-style restaurant in Michigan to support his family.

Aside from the lack of fund to support the family, Kim and Marshall Bruce Mathers III were not particularly that perfect as a couple; they never really got along, thus, Jade grew up in a violent household with her parents always quarreling and raising their voices.

The couple were married twice before finally decided to go their separate ways in 2006. They were first married in 1999, four years after Jade’s birth, divorced in 2001, remarried in January 2006 and finally split for good that same year but agreed on joint custody of their daughter.

Hailie Jade grew up with her cousin Alaina Mathers, whom her parents adopted after her mom (Kim’s twin sister) could no longer take care of her, and Whitney – Kim’s daughter from another relationship whom Eminem also adopted. Altogether, Kim has three biological children; Hailie Jade Scott-Mathers, Whitney Scott, and Parker Scott.

In 2003, Kim was charged for possession of cocaine, she was fined and placed on probation but she violated her probation and had to serve a one-month jail term.

In 2015, she attempted suicide by crashing her car into a standing pole but survived the accident She also went through depression after losing her twin sister to a heroin overdose in 2016.

Whitney is currently 16 years old, has long brown hair, brown eyes and she wears glasses and contact lenses. She is about 5ft 3ins (1.6m) tall (she is still growing) and weighs around 128lbs (58kgs). She doesn’t seem to have a boyfriend, or maybe she just doesn’t talk about him.

Whitney is still in High School so isn’t earning any money, but Eminem’s net worth is estimated to be around $170 million, according to authoritative sources.

Being daughter of multimillionaire Rapper dad, you really do not need to care about money anymore. Whitney is living a luxurious life with his daddy Eminem.