Gordon Ramsey Net Worth 2020 – Gordon Ramsay is a British celebrity chef, restaurateur, and television personality. He is a judge of the cooking show Masterchef, Hell’s Kitchen, The F Word, Ramsay’s Kitchen Nightmares, etc. 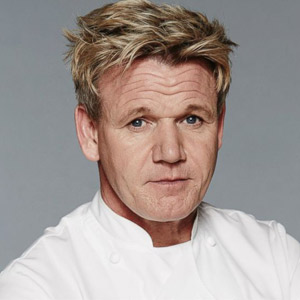 Gordon Ramsay was born on November 8, 1966 in Renfrewshire, Scotland, to Gordon a man with no permanent profession and Helen Cosgrove, a nurse. He was raised in Stratford-upon-Avon, Warwickshire, England from the age of 5.

The second of four children, he has an older sister, Diane, while Ronnie and Yvonne were his younger siblings. His early life was marked by abuse and neglect from his father, a “hard-drinking womanizer”.

He played football and was first chosen to play under-14 football at age 12. He was selected to play for Warwickshire. His football career came to an end because he was plagued by injuries.

Ramsay married Cayetana Elizabeth Hutcheson, known as Tana, a Montessori-trained schoolteacher, in 1996. They have four children, Megan, Holly, Jack and Mathilda and live in Battersea, in South London.

This short-tempered yet highly likable chef has a net worth of $80 million. His salary per episode is $225,000 and he earns an additional $10 million per year from his media and restaurant empire.

Ramsay’s Top Chef and Entrepreneur career, After finishing his studies, Gordan Ramsay placed himself under the direction of some Europe’s top chefs.

He apprenticed with Marco Pierre White at Harvey’s in London, worked for Albert Roux at Le Gavroche, and then worked under master chefs Joel Robuchon and Guy Savoy in France.

In 1993, Ramsay struck out on his own as head chef of the newly opened Aubergine in London where, over the course of three years, he earned the restaurant a two-star rating from Michelin.

More personal prestige followed in 1995 when Ramsay was awarded Newcomer of the year at the prestigious Catey Awards, an Oscars-like event for the restaurant and hotel business.

Ramsay was tapped to host two programs in the spring of 2004: IN Ramsay’s Kitchen Nightmares, he sought to turn around failing restaurants, and in Hell’s Kitchen, he ran a cooking competition among 10 celebrities, with audiences voting off contestants.

With reality television in full bloom in the U.S., the time was ripe for Ramsay to make his move across the Atlantic. In May 2005, and the American version of Hell’s Kitchen, which placed aspiring restaurateurs under the intense eye of the show’s host, debuted on FOX.

Like their British counterparts, American audiences learned to love and hate the abrasive chef as he narrowed the field of participants down to one final winner. Meanwhile, he launched another culinary series back in the U.K., The F Word.

Ramsay’s strong ratings on U.S. screens opened the door for an adaptation of Kitchen Nightmares, which debuted in September 2007.

That, in turn, led to the American productions of MasterChef (2010) and MasterChef Junior (2013), with Ramsay heading the group of judges. In 2012, he added another show to his schedule, a variation of his “save a failing establishment” theme with Hotel Hell.

Gordon Ramsay is a Chef, restaurateur and reality television star who has a net worth of $190 million.