Gasia Mikaelian is a famous American television personality who currently works as an anchor in KTVU in the Bay Area. Also, she has worked as a news reporter for several radio and television networks in Arizona, Huston, Alabama, and California.

Let’s find out more facts about her such as birthday, education, career, salary, net worth, husband, children, etc. 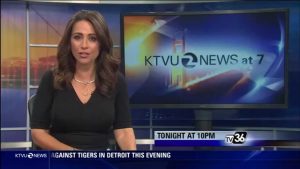 Gasia Mikaelian was born on 4th July 1975 in the greater Bay Area. Currently, she resides in Oakland, CA. Before her birth, her parents immigrated to the USA from Armenia.

Therefore, she holds American nationality, but she belongs to Armenian ethnicity. Gasia’s parents always taught her not to lose her Armenian heritage. She had risen with her siblings, who all have had their traditional Armenian name.

As you already know Gasia was born to Armenian parents along with her siblings. The parent-related post of Gasia gives an insight into her never-ending love for them.

However, she wished her to upload an old 80’s photo on Twitter on Mother’s Day in 2015. Similarly, through a Twitter post, Gasia also expressed her attachment to her father.

The siblings of the former KSWT reporter reside in the Bay Area and often visits them. On occasion of National siblings day, she posted her brother and sister’s picture on Instagram and said she has two sisters and a brother.

Currently, Gasia’s parents are living in the same house she grew up in.

Gasia attended Saturday School in her childhood, which is an Armenian school. During her high school, she was considered to be a late bloomer because all of her friends were planning to be a doctor, lawyers, policeman but she had no idea what she wanted to be in the future.

After high school, she joined Las Positas College and took all of the classes of writing courses over two years. However, later, she went to the San Diego State University to study journalism with the initial intention of going on radio broadcasting.

Gasia Mikaelian Went Back To Her High School

Gasia Mikaelin went back to her high school — Granada in Livermore after 22 years of succeeding. She discovered that former teachers had retired and the school had changed a lot.

She also said that they have an incredible TV and Film production classes and students took her interview for one of their projects. See her Facebook post about the visit to the high school.

As her parents had told not to lose the Armenian tradition, she chooses to give a traditional Armenian name to their sons. Moreover, she also teaches them the Armenian language and culture.

Gasia had also said that after giving birth to the babies and going back to work was the hardest thing she has ever done. She has the guilt of leaving her children. She had said these words in an interview about her feeling while rejoining her job after the birth of Tigran.

“I felt guilty because I should be at home. But I realized that by going back to work; I am taking care of my family. That was a huge realization for me which helped me feel less guilty. Since I work, we can enjoy a nice life including things like a Zoo Membership, etc.”

She kept baby-sitters to take care of her babies. But, six months later she decided that her husband would stay at home and take care of their boys and raise them. For this, she called her husband, Paul Perez as Saint Paul.

Gasia first worked at the University Radio Station and wrote for the University Newspaper. She enjoyed her work and got lots of experience from there.

After that, she went for an interview at the KFMB Station that had both TV and Radio. She has been selected and started working there. At first, she had worked on the radio and then move on the TV  as she was always interested in the TV and wanted to be an anchor.

Then, she left the KSWT and joined XETV and worked there as an anchor and reporter from 2000-2002. Again she continued with KFMB in Houston from 2002 -2005 for three years.

However, in 2005 she joined KTVU and had worked as an anchor on KTVU Channel 2 news at 7:00 pm on TV 36.Three years ago she moved to KTVU Channel 2 “Mornings on 2” and still working on it. Here is the YouTube video of Gasia Mikaeian’s first day at KTVU.

Gasia Mikaelian Salary and  Net Worth

According to sources, her yearly salary was $250,000 in 2015 and 42 years old, Gasia’s is working as a news reporter and an anchor for two decades.

Therefore, she has earned an impressive amount of money throughout her career. In this way, her net worth must be around $2 – $4million. However, she didn’t reveal her salary and net worth yet.