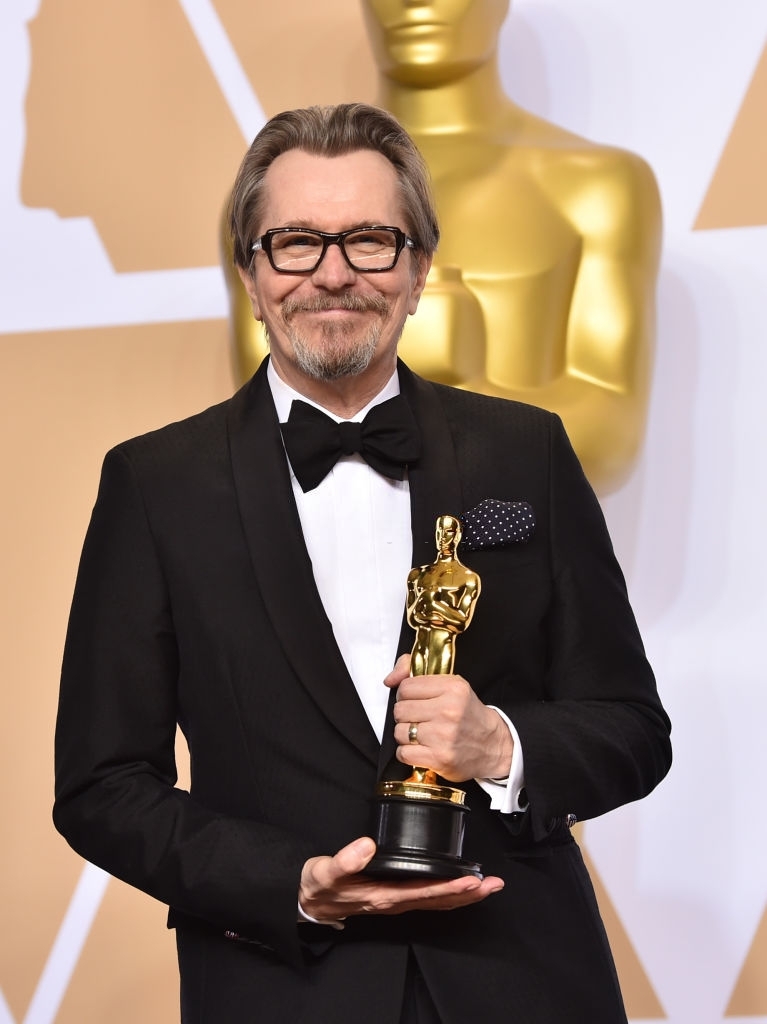 Gary Oldman Net Worth – Gary Oldman is an English actor and filmmaker best known as one the most celebrated thespians of his generation. His diverse career encompassing theatre, film and television has garnered him numerous awards including BAFTA Awards, Critics’ Choice Awards, a Golden Globe Award plus a Screen Actors Guild Award.

Gary Oldman was born on March 1, 1958, in New Cross, London, as the son of Leonard Bertram Oldman and Kathleen. Growing up doesn’t seem like such a fairytale for Oldman as he once disclosed that his father was an alcoholic who left the family when he was seven years old.

A pianist as a child, and later a singer, Oldman was inspired to put his musical aspirations on hold to pursue theatre act after watching  Malcolm McDowell perform on stage. He was a student at West Greenwich School in Deptford and after leaving school at age 16, he started working in a sports shop.

Despite his intense private lifestyle, Gary Oldman is known to have married five times. First, he married English actress Lesley Manville in 1987 and the marriage lasted only two years, shortly after the birth of their son Alfie, in 1989.

In 1990, he married American actress Uma Thurman and got divorced in two years as well. Oldman’s marriage with Donya Fiorentino lasted four years (1997 – 2001) blessed with two sons. Their divorce was quite messy but the actor gained sole legal and physical custody of their sons in a court verdict.

Still open for love and companionship, Gary Oldman met and married English singer and actress Alexandra Edenborough in Santa Barbara, California on December 31, 2008, and both enjoyed the marital bliss for seven years until Edenborough filed for divorce in 2015.

As charming as he has proven to be with women, Oldman recently married writer and art curator Gisele Schmidt in a low-key ceremony in September 2017.

At 59, Gary Oldman has two grandchildren, Matilda and Ozzy Oldman through his eldest son Alfie and a sister Maureen, who’s also an actress

In his quest to become an actor, Gary Oldman enrolled to study with the Young People’s Theatre in Greenwich in the mid-1970s while working jobs including a porter in an operating theatre, selling shoes, etc to support his welfare.

His attempts to apply to the Royal Academy of Dramatic Art (RADA) was a huge failure, in which they advised him to find something else to do for a living. But Oldman’s determination to become an actor surpassed whatever opinion others have on his ability to perform on stage.

He later won a scholarship to attend the Rose Bruford College in Sidcup, Southeast London, and graduated with a BA in Acting in 1979.

He was the first in his class to receive professional work and made his stage debut in the same year as Puss, alongside Dick Whittington and His Cat at York’s Theatre Royal.

Featuring in countless plays and films in London as part of a dream come true for Oldman. From London to the US, Oldman has lots of complements trailing his acting roles in movies since the 1980s. A US critic once referred to his work as “phenomenal.”

Oldman moved to the United States in the 1990s where he landed a major role as Count Dracula in the romance-horror Dracula, a film that became a box office success worldwide.

His incredible performance in the movie gained him recognition as the Best of Actor of 1992 by the Academy of Science Fiction, Fantasy & Horror Films.

While his career in Hollywood seems to be going successfully steadily, it wasn’t all so smoothie for Gary Oldman. Just like most celebrities, he endured some setbacks for more than a year when the major movie roles weren’t dropping as usual.

But as no condition, they said, is permanent, Oldman returned to prominence when he landed a significant role in the Harry Potter film series in 2004, playing Harry Potter’s godfather Sirius Black.

With his prominence still on the rise as a great entertainer, Oldman featured in ‘Batman Begins’ as James Gordon. The 2008 movie is described as commercially and critically successful and according to a prominent film critic Mark Kermode, the best performance in the even more successful sequel The Dark Knight was from Gary Oldman.

In 2020, Gary Oldman’s wealth was estimated to be $50 million. With major movie roles, especially Darkest Hour which gained him five awards including the golden globe, there’s no doubt that Oldman is on the list of richest celebrities in Hollywood today.

His propensity to win awards dates back to 1987 when he won the London Film Critics’ Circle Award for Best Actor. 2018 is clearly the best for Oldman with 5 awards to crown his hard works.