Evander Holyfield Net Worth – Back in the days, Evander Holyfield was a force to reckon with in the world of boxing, many think he still is. The American former professional boxer reigned as an undisputed champion in both the cruiserweight and heavyweight divisions during the years he competed from 1984 to 2011.

His career had many lows as well from bankruptcy to doping scandals to messy divorces, and baby mama drama, Evander has been through it all.

However, in recent years, boxing’s only 4-time heavyweight champ has launched a career as a boxing promoter under his promotion company the Real Deal Boxing and it’s looking like he will be growing old free of debts. He believes he can amass even more wealth than he did in his heydays. 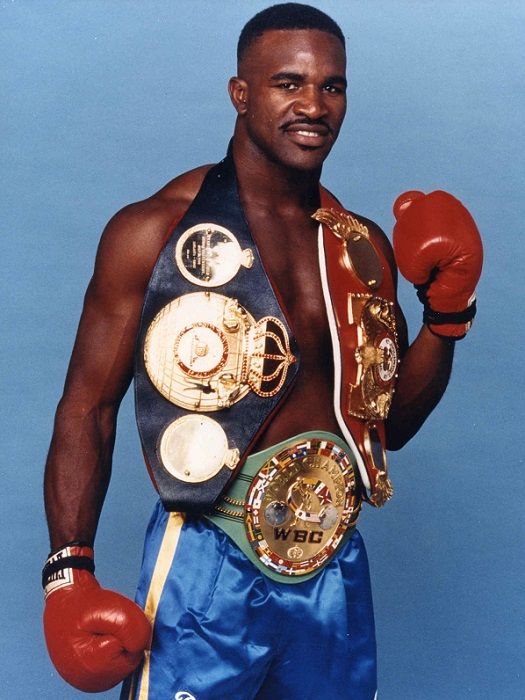 Evander Holyfield was born on October 19, 1962, in Atmore, Alabama and raised in a low-income Atlanta suburb of Sugar Hill. Holyfield was born as the youngest of 9 children to a different father who was hardly ever in the picture.

“I didn’t have a father but I had the right momma. She could have quit at any time – but she was the real ‘Real Deal’. She used to say ‘Son, don’t be a coward – a coward dies a thousand times but a man dies once,’ the boxing icon one said of his mother Annie Holyfield who was a cook in a restaurant. Holyfield said he inherited his athletic genes from his mom who was a runner and exceptional skater. Holyfield’s mom died in 1996 as a result of injuries inflicted from a car accident.

Holyfield is among the athletes with the most children – 11 from 6 different women. His first wife was Paulette Bowen, they married in 19885 and split in 1991. He then married Janice Itson in 1996 but divorced in 2000. Evander married his third wife Candi Calvana Smith in 2003 but they separated in 2012.

Two of Evander’s sons have already begun athletic careers with plans to go professional. Taking after Evander is Evan who hopes to go to the Olympics and snap a boing medal just like dad.

His other son Elijah Holyfield chose a different sport – football which happens to be Holyfield’s first love. Elijah plays as a running back for his varsity team Georgia Bulldogs.

At a very tender age, Evander took interest in boxing and began boxing on the streets. However, he almost quit when a white boy named Cecil Brown in his street beat him twice. However, Evan found the courage to fight him again and, the third time was the charm.

Holyfield at 15 became the Southeastern Regional Champion and won the tournament as well as the Best Boxer Award. At the 1983 Pan American Games in Caracas, Venezuela, Holyfield won the silver medal after losing to Cuba’s Pablo Romero.

In 1984, Holyfield won the bronze medal at the Summer Olympics held in Los Angeles and by the end of the year, he went pro with his boxing starting in the light heavyweight division. He moved to cruiserweight in 1985 and then to heavyweight in 1988. Evander beat Buster Douglas in 1990 to claim the undisputed WBA, WBC, IBF heavyweight titles. Holyfield defended his title fighting against George Foreman and Larry Holmes. He suffered his first loss in 1992 after losing to Riddick Bowe.

Holyfield regained his title in another bout against Bowe in 1993. After losing the title to Michael Moorer in 1994, Evander regained it again in 1996 beating Mike Tyson. He became the first boxer since Muhammad Ali to snap the heavyweight award three times.

Holyfield won his rematch against Tyson in 1997. The match labeled the bite fight saw Tyson bit off Evander’s ears in the third round. After losing to Lennox Lewis in 1999, Evander won the WBA heavyweight title in the new millennium defeating  John Ruiz.

Thanks to Holyfield’s fame as a boxer, he was featured in a number of films including the Christmas special of the Fresh Prince of Bel-Air in 1990, Summer of Sam, Arthur and more. Evander has a brother Bernard Holyfield who is an actor and dancer.

Evander is said to have made at least $513 million from his boxing career, but sadly, the boxer faced a lot of financial difficulties which forced him to prolong his career so he could pay off debts which were dominated by alimony and child support payments.

In 2008, his $10 million 54,000-square-foot (5,000 m2), 109-room estate in Atlanta faced foreclosure and was put up for sale. Rapper Rick Ross later bought the property for $5.8 million. An article in Independent in 2012 described Evander as flat broke. However, Holyfield has recovered from his debts and now dedicates his time to becoming a professional boxing promoter.

He told BBC Sports in a 2015 interview; “Losing everything was hard,” “The only way I got through it was to think ‘God allowed me to have that house, he’ll allow me to have another one. The Bible says ‘the second half of your life is going to be better than the first half’. I made $230m in the first half, so I’ve still got reasons to live.”

Holyfield plans to get back to minting top dollar through his Real Deal promotion company. The company promoted its first event on June 24 2017, at Freedom Hall in Louisville, Kentucky.