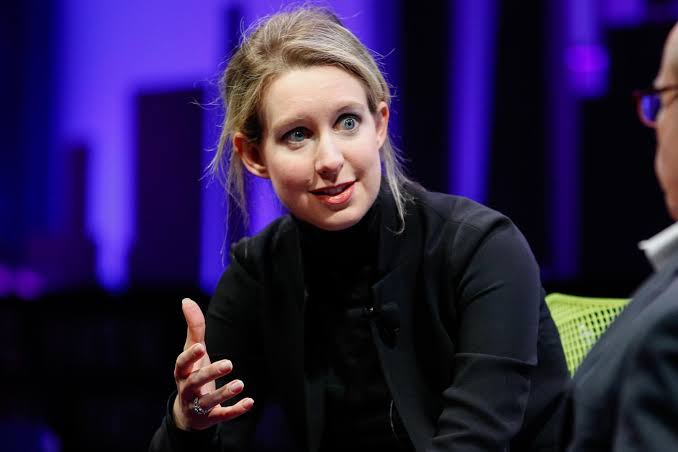 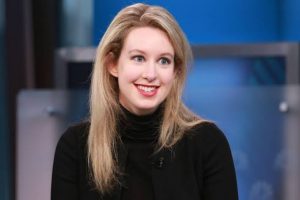 Elizabeth Anne Holmes was born on February 3, 1984, in Washington, USA. Her father, Christian Rasmus Holmes IV, was a politician dealing with overseas aid.

Elizabeth’s mother worked in the USA Congress. Besides, Elizabeth has a brother who was later responsible for production management in Theranos.

Interestingly, the majority of men in their family have the name Kristian – Elizabeth’s father, brother, grandfather, great-granduncle.

In her childhood, Elizabeth had an unordinary view of her future life. Often she said about her plans to create something which can change the world and improve people’s lives.

Elizabeth’s parents moved to Houston where her father got a job at a machine-building company. There the girl entered the St. John’s School. Being a teenager, Elizabeth with her brother studied in China where managed to learn Mandarin Chinese.

At that time the girl became interested in computer technologies and created the C++ compiler which later was sold to a local University.

Elizabeth found a new passion – medicine – after she read her great-granduncle’s biography. During World War II, he was an outstanding surgeon and investigator, and a dean of the University of Cincinnati Medical College. His history and belief provoked Elizabeth’s interest in medicine and chemistry.

She left Stanford during her sophomore year to launch Theranos, a company devoted to developing minimally invasive laboratory testing services, serving as the company’s founder (2003) and later as the company’s CEO.

Theranos produced its first offering in 2014, a laboratory testing process that claimed to run more than 1,000 medical tests on an individual after collecting only a few drops of blood—a technology capable of revolutionizing medical data collection.

Theranos maintained that it was improving laboratory blood collection and testing by miniaturizing and automating the process.

Traditional blood testing relied on drawing 5–10 ml (0.17–0.34 fluid ounce) of blood through a large needle to fill one tube for each test requested by a physician.

That process was often painful for patients and costly for insurance carriers, and experts worried that the procedure had dissuaded patients who were young, were elderly or possessed a genuine fear of needles from getting their blood work done in a timely manner.

Laboratory data was one of the key tools physicians used to help patients make informed decisions about care.

Theranos’s process, on the other hand, asserted that a far smaller sample (a few drops are taken from a pinprick of a finger) was sufficient to provide the raw material for the company’s diagnostic tests, and the procedure was shown to be far less painful and costly than traditional testing.

Between 2003 and 2014, Holmes grew Theranos by securing funding from investors, building infrastructure, and developing the company’s proprietary processes in secret.

In 2013 Walgreen Co., which boasted more than 8,000 drugstores in the U.S., announced that it had partnered with Theranos to establish wellness centers inside its Walgreens pharmacies.

By 2014 Theranos provided more than 200 diagnostic tests, was licensed to operate in almost all 50 U.S. states and held certification by the U.S. government Centers for Medicare & Medicaid Services (CMS), the federal regulator overseeing medical laboratories.

By late 2015 Theranos’s proprietary technologies and its primary medical testing device, the Edison had become the subject of controversy after a series of articles by reporters from The Wall Street Journal, The Washington Post, and other outlets argued that Theranos had exaggerated Edison’s competence

Noting that the medical device was being used for only a fraction of the company’s tests, despite claims to the contrary made by Holmes.

Other questions concerning the company and its secretive processes soon appeared, which ranged from Theranos’s decision to release aggregate testing data (rather than primary testing data) to the U.S. Food and Drug Administration to compliance problems with the company’s Newark, California, laboratory.

Theranos was also under scrutiny for its substantial delays in giving federal authorities full access to its medical devices and subjecting its devices and technologies to scientific peer review.

And thus CMS blocked Theranos from receiving reimbursements from Medicare and Medicaid and forbade Holmes from possessing or operating a medical laboratory for two years.

In March 2018 the U.S. Securities and Exchange Commission (SEC) charged Holmes and Theranos’s former president, Ramesh Balwani, with fraud by taking more than $700 million from investors while advertising a false product.

Holmes settled the charges with the SEC by agreeing to pay a fine of $500,000, surrendering almost 19 million shares in Theranos to relinquish her controlling interest in the company, and consenting to be barred from serving as either an officer or director of a public company for a period of 10 years.

In exchange, both Holmes and Theranos were able to avoid either admitting or denying the SEC’s allegations against them.

In June 2018, however, she and Balwani were indicted for wire fraud by federal authorities. That same day Holmes stepped down as CEO.