Don Rickles Net Worth – Beyond being famous as an American stand-up comedian, Don Rickles was also popular as an actor. He played many film and television roles.

Those who don’t like his comedy have probably been roasted in one of his acts as Don is a specialist in insult comedy. While he throws offensive insults at his audience, the laughter he generated was great. 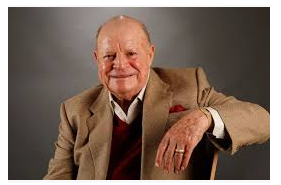 he was born as Donald Jay Rickles on May 8, 1926, in Queens, New York City and was brought up in the northwestern neighbourhood of the city.

The legendary comedian often described as the master of comic insult believes God created humans and placed them on earth to laugh. He would agree he’s gifted to say things with a certain attitude; things everyone else is scared to utter.

Apparently, his mother noticed this and nurtured it. Irrespective of the fact that Don’s father didn’t fancy humour that much as he believed there is a very thin line between being amusing and being stupid, she would encourage Don to throw jibes at his uncles and generate laughter during family gatherings.

Don came from a Jewish family. Records have it that the comedian’s origin was traced to Lithuanian and Austria. His father, Max Rickles who worked as an insurance agent came to the United States from Kaunas with his parents way back in 1903. Likewise, his mother’s parents emigrated from Austria to New York City where they had her.

At his death, Don Rickles was survived by his family which includes his wife, Barbara Sklar; daughter, Mindy Mann and his grandchildren, Ethan and Harrison Mann. Rickles and Barbara married in 1965 after they met through Don’s agent and became lovers.

Apart from Mindy, they had a son Larry Rickles. He was a producer and TV comedy writer until he died in December 2011. Larry was only 41 years old when he passed away.

It is known that the comedian was a student of Newtown High School. When he graduated, he joined the U.S Navy and served in the Philippines during the second world war. While at that, Don plotted how he will actualize his dream of becoming an actor. When he was eventually discharged, he went to the American Academy of Dramatic Arts.

Despite the knowledge he gathered from the institution, Don had a hard time landing an acting job. This drove him back to comedy and he started doing stand-ups here and there. ]

As one would expect, he was heckled. But, he soon became adept at dealing with hecklers by responding with comic insults. His audience liked it and that marked the beginning of a very successful career in insult comedy.

As usual with most celebrities who have passed on, people are inquisitive about the wealth Don left behind. As such, various estimates have been made specifying that the value of his wealth when he died is $30 million. While we are yet to substantiate the figure, it is obvious that “Mr Warmth” accumulated great wealth from his comedy career.