Dolly Parton Siblings, Family, Bio– Dolly Parton is a beloved cultural icon whose powerful voice, songwriting and personality have won the hearts of the country and pop music fans for decades. She has also appeared in an array of screen projects.

Born on January 19, 1946, in Locust Ridge, Tennessee, Dolly Parton was one of 12 children in a one-room cabin in the foothills of the Appalachian mountains is no picnic. The 4th Born to be Specific. 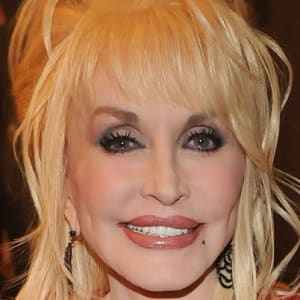 Despite having close to nothing, Parton was raised learning to sing in the church and followed her dreams by hitting the Nashville music scene at the age of 13 with her first performance at the Grand Ole Opry.

Inspiring millions with her rags to riches journey, Dolly Parton has become a national treasure.

But Dolly is not the only successful Parton child. Music was part of the entire Parton family upbringing. Where did each of her 11 siblings end up after Parton made it big in Nashville?

Larry Parton – Unfortunately, Larry died as an infant at only 4 days old when Dolly was only 9 years old.

Stella Parton – Stella Parton is no stranger to the country music scene. With her own 40 years of experience, she has created her own path and even had some successful songs in the 1970s.

Randy Parton – Randy is a singer and performer, but his big claim to fame is his big mishap with the Roanoke Rapids Theatre in Roanoke Rapids, North Carolina (which used to be the Randy Parton Theatre). Parton signed a million dollar deal to manage and perform in the theatre and it didn’t quite work out for him

Rachel Dennison – The youngest of the Parton siblings, Dennison is a retired actress-singer, best known for her starring role in the 1980s sitcom “Nine to Five.” She also performs with her siblings from time to time.

Willadeene Parton – Willadeene became an author, publishing Smoky Mountain Memories: Stories from the Hearts of the Parton Family, which tells stories of the Parton family upbringing. She also wrote a cookbook, All-Day Singing & Dinner on the Ground

Freida Estelle – Freida starting out singing back up for Dolly and tried making it as a punk rock singer in the 1980s. She opened a wedding chapel and is an ordained minister, so if you’ve ever dreamed of having Dolly Parton officiate your wedding, sounds like this is the next best thing.

Robert Lee, David, and Coy Parton – These three stayed pretty private and out of show business, so not much is known about them. They can occasionally be seen accompanying Dolly to events.

Floyd Parton – Floyd also pursued music and turned out to be a talented songwriter. He penned multiple songs for Dolly including, “Rockin’ Years,” “Nickles and Dimes,” and “Waltz Me to Heaven.”

Cassie Nan – Cassie is also a singer/performer, though a bit more low key than some of her other siblings. She has performed shows at Dollywood with multiple siblings including Randy and Rachel.

Robert Lee Parton Sr. (Dolly Parton’s Dad) – A poor farmer and construction worker, Robert Lee Parton was born in 1921. He tried his best to provide for his family even though he was very poor. The family struggled to make ends meet. So much so, that during Dolly Parton’s birth, her father paid the doctor with a bag of oatmeal.

Avie Lee Parton (Dolly Parton’s Mom) – Parton’s mother was born in 1923 in South Carolina. A homemaker and mother of 12, Avie Lee Parton, was the first musical influence in her daughter’s life. She was the one who encouraged her children to sing at home and in church.

Dolly Parton Career and Net worth 2019 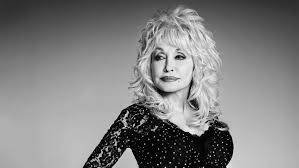 Country music icon and actress Dolly Rebecca Parton first exposure to music came from family members, including her mother, who sang and played guitar. At an early age, she also learned about music while performing in church

Parton received her first guitar from a relative and soon began to pen her own tunes. At age 10, she started performing professionally, appearing on local television and radio shows in Knoxville. Parton made her Grand Ole Opry debut three years later.
Set on a career in music, she then moved to Nashville after finishing high school
Parton’s singing career really started to take off in 1967. Around this time, she partnered with Porter Wagoner on The Porter Wagoner Show. Parton and Wagoner became a popular duo and the pair recorded a slew of country hits together.
Much was made of her shapely curves, petite stature and warm personality, which to some belied a thoughtful, visionary artist with a strong business sense.
Since her early career, Parton has protected the publishing rights to her catalog of songs, which has earned her millions in royalties. Over the years, Parton has enjoyed many other successful collaborations. She recorded the Grammy Award-winning album Trio with Emmylou Harris and Linda Ronstadt in 1987. 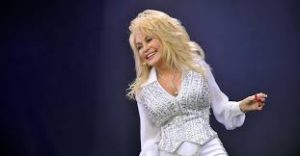 In 1992, her song “I Will Always Love You” was recorded by Whitney Houston for the film The Bodyguard.
Houston’s version catapulted Parton’s song into a new stratosphere of popularity, with the single sitting atop the pop charts for 14 weeks and becoming one of the bestselling singles of all time.
“When Whitney did it, I got all the money for the publishing and for the writing, and I bought a lot of cheap wigs,” she told Anderson Cooper when he asked her how she spent her royalties from the song.
Then in 1993, Parton teamed up with Loretta Lynn and Tammy Wynette for Honky Tonk Angels. Parton revisited her now signature song, “I Will Always Love You,” in 1995 as a duet with Vince Gill.
Parton explored the music of her Appalachian roots with The Grass Is Blue (1999) with a little help from such talents as Alison Krauss and Patty Loveless.
The record won a Grammy (Parton’s sixth) for best bluegrass album in 1999.
Parton was inducted into the Country Music Hall of Fame and won another Grammy the following year for the song “Shine” off the 2001 album Little Sparrow. 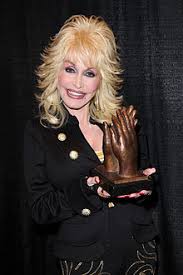 Continuing to write and record, Parton released Backwoods Barbie in 2008. The album featured two country singles, “Better Get to Livin'” and “Jesus & Gravity.”

Parton got into a public feud with satellite radio shock jock Howard Stern around this time. She was upset after he aired a segment in which previously spoken recordings were manipulated to make it sound like she made obscene statements.

In 2006, Dolly Parton received special recognition for her lifetime contributions to the arts as one of five artists feted at the annual Kennedy Center Honors. She also picked up a second Academy Award nomination for the song “Travelin’ Thru,” which appeared on the soundtrack for 2005’s Transamerica.
Over the years, Parton has continued to work as an actress in an array of films and TV projects that include Rhinestone (1984), Steel Magnolias (1989), Straight Talk (1992), Unlikely Angel (1996), Frank McKlusky, C.I. (2002) and Joyful Noise (2012), having also hosted her own variety show in both 1976 and 1987-88. 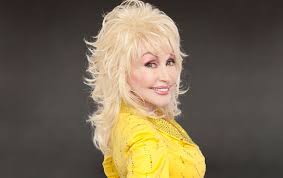 At the 50th Annual Country Music Association Awards in 2016, Parton was honored as the recipient of the Willie Nelson Lifetime Achievement Award.In early 2018, just before the music icon’s 72nd birthday, a Sony Music press release revealed that she was still setting records and sweeping up accolades.Along with receiving gold and platinum certification for some of her songs, Parton was to be honored with the Governors’ Award at the 32nd Midsouth Regional Emmy Awards.Additionally, she was recognized in the Guinness World Records 2018 edition for her accomplishments of most decades with a Top 20 hit on Billboard’s Hot Country Songs chart (six) and most hits on Billboard’s Hot Country Songs chart by a female artist (107). 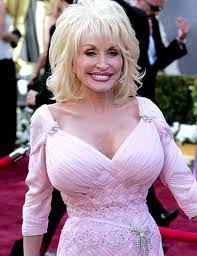 Having already been honored by the Grammys with a Lifetime Achievement Award in 2011, Parton received another tribute during the February 2019 awards show, with artists like Katy Perry, Miley Cyrus and Kacey Musgraves joining her on stage to sing a medley of her hits.

After writing so many of her own hits, Parton penned the songs for a new musical based on her earlier hit workplace comedy, 9 to 5. The show, starring Allison Janney (who won a Tony for the role), ran on Broadway for several months in 2009.

Parton has shown no signs of slowing down. In 2011, she released Better Day, which fared well on the country album charts. In 2012, Parton published her book Dream More: Celebrate the Dreamer in You. She is also the author of the memoir Dolly: My Life and Other Unfinished Business (1994).

“I think that I’ve been at this so long that [my audience has] come to know me, they know I’m not judgmental. They know I like everybody. I want to be accepted myself, and I not only accept, but celebrate, the difference in everyone.” – Dolly Parton

The TV movie Dolly Parton’s Coat of Many Colors, a biopic about the singer’s childhood, aired in 2015. It starred Alyvia Alyn Lind as young Dolly and Sugarland star Jennifer Nettles as Parton’s mother.

The next year, Parton had her first number 1 country album in more than 25 years with the set Pure & Simple, supported by a North American tour. The 2016 holiday season also saw the airing of the biopic sequel Christmas of Many Colors: Circle of Love. 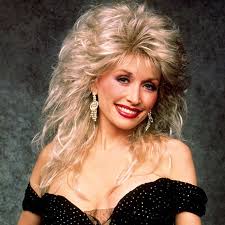 In June 2018, Netflix announced that they would produce a Dolly Parton anthology series, to premiere in 2019. Each of the eight episodes will be based on one of Parton’s songs, with the iconic performer slated to executive produce and appear in select episodes.

Dolly Parton has worked with charitable organizations in support of numerous causes over the years and established her own Dollywood Foundation in 1996.

With the goal of improving literacy among young children, she created Dolly’s Imagination Library, a program which donates more than 10 million books to children annually.

“They call me the Book Lady. That’s what the little kids say when they get their books in the mail,” she told The Washington Post in 2006. “They think I bring them and put them in the mailbox myself, like Peter Rabbit or something.”

Though many of her charitable contributions are anonymous, Parton has used her success to give back to her community by providing scholarships for children, donating thousands to hospitals and providing technology and supplies for classrooms.

Parton has been married to Carl Dean since 1966. The couple met at a Nashville laundromat, the Wishy Washy, two years earlier. On their 50th anniversary, the two renewed their vows. “My husband is not one who wants to be just thrown out there,” she has said about Dean. “He’s very private, and I’ve always respected that for him and about him.”

Parton is the godmother of pop singer and actress Miley Cyrus.
Now aged 71 and with a very good body, Dolly Parton has one of the biggest voices to pass through this earth. That has helped her to sell millions of records. More so, she has also been a part of some movies and she doesn’t drag her feet when it comes to business. 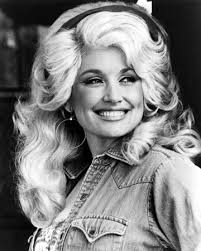