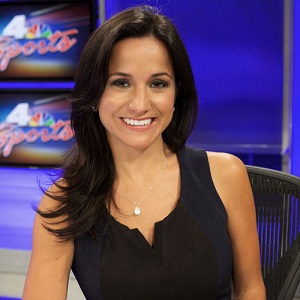 However, Dianna Russini is one of the few that fell in love with sports while she was way younger. She has taken her zeal in sports to the screens working with ESPN as the anchor to SportsCenter. It is no doubt that Dianna is one of the rarest kind of females in the world.

You may know her just as a journalist who is exceptionally good at talking about some of the biggest names in sports, but Dianna herself has a history of sports which dates back to her high school and college days.

Dianna is popular among sports lovers not only for her talent but for her hot body which makes it incredibly difficult to believe her marital status. 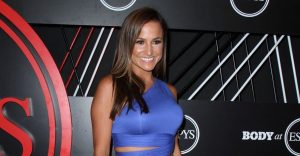 Dianna Russini was born on February 11, 1983, in the Bronx, New York City, New York and grew up in Norwood, New Jersey, where her parents moved to provide better opportunities to their children. She has an older brother and used to play baseball with him and their father.

She attended Old Tappan High School in New Jersey where she developed an immense passion for sports. During her high school years, she was an All-State athlete in four different sports: basketball, soccer, softball, and track.

Training under Brian Dunn as her head coach, she excelled in basketball, even though her strongest suit was track, while she was relatively weaker in soccer. Despite being an undersized forward at 5-foot-6, thanks to Dunn’s tough training, she became a three-year starter and lockdown defender for the varsity basketball team.

After her high school graduation, determined to prove that she could make it to the Division 1 level, she decided to enroll at the Fairfax, Virginia campus of George Mason University as a soccer walk-on. She gained 20 pounds extra weight by her sophomore year and became the starting striker of her university team. She graduated from university with a Bachelor of Arts and Journalism degree in 2005.

While Dianna Russini maintains on social media that she is single, she has been romantically linked with a number of people.

As a student, Russini became a Student Sideline Reporter for Comcast from 2003 until her graduation year in 2005. Russini graduated with a Bachelor of Arts degree in Journalism and joined News 12 Westchester/ Hudson Valley as a reporter.

Dianna Russini also worked in NBC Connecticut as a news and sports journalist. While Russini was in NBC, she covered the Boston Marathon bombing and she was one of the presenters who covered the entire scene of the shooting. Later she joined ABC News.

In May 2013, Russini joined WRC Channel 4 as reporter and anchor. She worked in WRC covering several sports and news, Russian left WRC on May 2015 ending two-year career. After WRC, she joined EPSN in July 2015, where she was featured in a SportsCenter as a host.

In SportsCenter, she works as a sports news host and she is also been seen taking expert analysis about the several games. And in two years of service in ESPN, she has established herself as a star anchor.

Beautiful sportscaster and anchor, Dianna has not married to the date, because she neither revealed her husband details nor disclosed with whom she has engaged.

She was rumored to have dated American baseball player David Wright in 2008, but the relationship reportedly didn’t last over a year. It has also been rumored that she is secretly engaged to a Manhattan Hedge Fund manager.

Recently, this beautiful reporter is living with her happy family, friends, and relatives in Washington and also spent her luxurious single lifestyle as well.

Net Worth of Dianna Russini

Dianna Russini’s assumed net worth is $30 million at present. She has earned a salary of $300 thousand per year from her career. She has not revealed the exact net worth in the media, but we can get the knowledge of it through her salary.