Cory Booker Net Worth 2020 – Cory Booker is a junior Senator representing New Jersey at the US Senate. He is a Democrat and also the first African-American Senator to represent New Jersey. 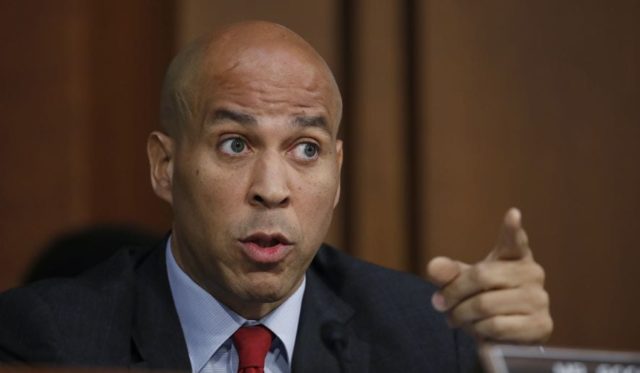 Formerly, he served as the Mayor of Newark for a period of seven years where he co-sponsored and voted for the Employment Non-Discrimination Act in 2013.

Cory Booker is an American politician who has a net worth of $3 million.

Cory was born Cory Anthony Booker on April 27, 1969, in Washington and was raised in Harrington Park, New Jersey. He studied at the Northern Valley Regional High School, Old Tappan and played football. After that, he studied political science at Stanford University where he earned a Bachelor of Arts degree in 1991.

The following year being 1992, he obtained a Masters degree in sociology. Cory Booker was also given a Rhodes Scholarship in 1994 which took him to study history at the University of Oxford.

He went further to earn his Juris Doctor at Yale Law School in 1997. While at Yale, he conducted free legal clinics for low-income residents and was one of the founding members of the Shabtai Society.

In addition, Cory Booker also joined the Big Brothers Big Sisters of America which enabled him to function actively at the National Black Law Students Association.

After graduation from Yale, Cory Booker began to contemplate advocacy work and also set his eyes for the city council in Newark. He then worked as a staff attorney for Urban Justice Center in New York and also worked part-time as a Newark Youth Project program coordinator.

In 1998, Cory won a seat at the Municipal Council of Newark and began to draw attention to drug dealing and violence issues. He achieved this by going on a hunger strike and living in a tent and motorhome in areas where drug-dealing were paramount.

He then introduced initiatives in the council that impacted lots of changes in areas such as housing, law and order, young people and several other issues.

In 2002, Cory began contesting for Mayor but lost. However, in 2006 contested again and won along with his comrades who also swept the city council elections.

In 2010, he was re-elected again as Mayor although two out of his 9 comrades in the city council lost during that election. In 2013, Cory Booker ran for the U.S. Senate seat and won, replacing the late Frank Lautenberg and has since been a strong and avid member of the Senate. Subsequently, he joined the Congressional Black Caucus, as well as the Congressional NextGen 9-1-1 Caucus in which he had committee assignments in various subcommittees such as; Oceans, Atmosphere, Fisheries, and Coast Guard, Aviation Operations, Safety, and Security, among others.

He has so far become a heavyweight in American politics and has played active roles in a handful of policies including; abortion rights, affirmative action, civil liberties, climate change, Confederate monuments, education, gun rights amongst a host of other policies.

Cory Booker is currently not married. Though he had previously described himself as a “straight male,” he has been accused many times of being gay, which he has never publicly accepted or denied.

More so, given the fact that he recently became close with the Instagram poet, Cleo Wade, rumors no doubt have been making rounds that the two are actually dating. Though none of these has been confirmed,  we sure will keep our ears peeled for the latest on his relationships.