Colin Mochrie is, the Canadian actor and comedian did not plan on ending up in the entertainment industry.

His initial aspiration was to become a marine biologist, but thankfully, fate had other plans for him. Colin Mochrie is best known for his role on Whose Line Is It Anyway? 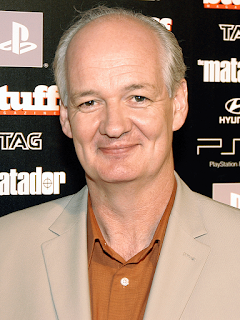 Colin Andrew Mochrie was born on the 30th of November 1957 in Kilmarnock, Scotland, as the oldest of three children. While it is known that his father was an airline maintenance executive, there is no information available on his mother.

The Mochrie family relocated to Montreal, Canada, from 1964 to 1969 before they moved to Vancouver.

On his educational qualifications, Colin attended Killarney Secondary School, where he was known to be a loner. He had the intention of becoming a marine biologist but he later dropped out of school and opted to participate in theater.

After graduating from high school, he went on to attend the Studio 58 theatre school in Vancouver for four years, mastering the art of improvisational comedy.

Colin is currently married to Debra McGrath, an actress, and comedian. The couple, who live in Toronto, have been married since the 8th of January 1989. The two have been married for over three decades and are still going strong.

The couple’s marriage is blessed with a daughter Kinley Mochrie, who was born in Toronto on the 3rd of September 1990. In 2017, with his daughter’s permission, Colin took to Twitter to reveal that Kinley was transgender.

According to the comedian, his childhood was spent moving from one location to another which contributed to his shy nature.

As a child, he spent a lot of time in front of the television set; apart from that, he was an everyday kid who constantly engaged in little squabbles with his younger brother and tended to be protective of his younger sister.

As previously mentioned, he is best known for his role in Whose Line Is It Anyway? However, not many people realize that Colin Mochrie appeared on both the American and British versions of the iconic comedy improvisation show.

The Comedian is also known for his role as Eugene Anderson on The Drew Carey Show, Scott Hawkins on She’s The Mayor and Mr. Cooper on Annedroids.

He has also appeared in Blackfly, Once a Thief, The January Man, Seven Little Monsters, Getting Along Famously, Love and Other Disasters, Trust Us With Your Love, Sunshine Sketches of a Little Town, The Real Blonde, and The Campbells.

His theater credit includes productions like The Brady Bunch as well as She Stoops to Conquer.

Mochrie has achieved so many awards in his career and got nominated for Canadian Comedy Awards five times in which he won two of them.

He also received Writers Guild of Canada and Gemini Award for playing a role in This Hour Has 22 Minutes. Recently in 2013, he becomes the person of the year with the Canadian Comedy award for the best comedy role.