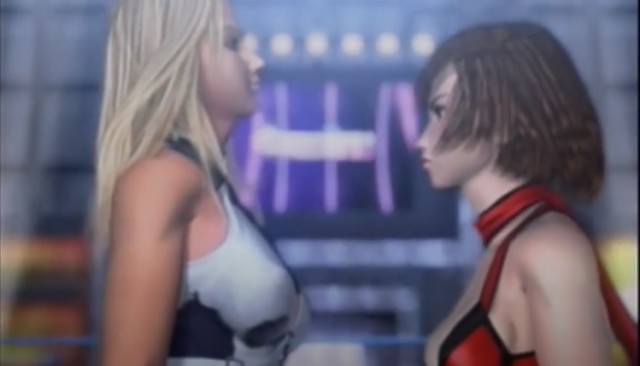 Clad Rumble Roses celebrates women’s wrestling. It’s like a baby to WWE SmackDown and Dead or Alive beach volleyball. Rumble Roses was published in 2004 for the ps2 by Konami. Yeah, the same Konami that brought you Castlevania and Metal Gear Solid. They won’t let you forget those games as you see advertisements for the series throughout this game.

If you’re a Wrist Ling fan, you might recognize them as the team that has always worked on SmackDown vs. RAW and WWE2k games. This was when you could create more than one wrestling game at a time. And not only that, it makes each game totally different from the other. Rumble Roses is definitely different but let’s talk about the in-game.

What is Rumble Roses? 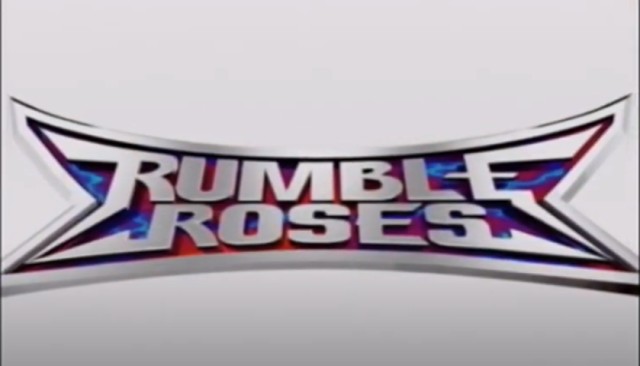 The Clad Rumble Roses game is an all-girls wrestling game where every competitor has talents in many different aspects. The girls each have a score to settle, taking to the ring to do so. What the game lacks in game modes, it makes up for it with visual appeal. There are only two different modes. You can take a girl into an exhibition match or play through the character’s story mode.

In the character’s story mode, you will learn the hidden motives for why each girl suits up. Completing the story mode will unlock additional wrestlers to play with. But not all the wrestling takes place in the ring. You can also go for a complete visual spectacle and have a mud wrestling match. Complete male fantasy, maybe. All it’s missing is an all-you-can-eat sandwich bar. And here I am going on about the game and haven’t even mentioned the most important part, the wrestling.

The actual wrestling feels somewhat limited. Each girl gets their own move set, complete with hits, punches, kicks, grabbles and submissions holds, and special finishers. The combat allows for some punishing-looking moves, along with more up-skirt shots than you could imagine. Targeting specific areas will weaken your opponent, allowing for easier submissions and pins. And you can fill up the Humiliation Meter and unleash an attack.

Let’s talk about the story. Believe it or not, there is a big ridiculous story. One of the wrestlers, Anesthesia, is secretly a mad scientist disguised as a nurse. She is holding the Rumble Roses tournament so she can collect DNA samples from female fighters to create super soldier cyborgs. This allows her to drive fear into the heart of the world. That’s the overall story.

But in story mode, which is basically a fighting style arcade mode, you’ll pick from any female fighters and go through a series of matches. You’ll learn who each character is competing with, and afterwards, you’ll knock an alter ego of that character.

Each alter-ego is either a face or a heel which is wrestling terms for a good guy or bad guy. So, if you’re a bad guy, you’ll unlock the good guy persona and vice versa. It’s pretty cool as it expands the roster, but it’s annoying that it can only display one persona at a time.

In exhibition mode, if you want to play the good persona of a bad wrestler, you’ll have to perform certain tasks within matches to switch them over. I’m just so bothered that my character select screen looks like I haven’t unlocked anyone yet.

There is one more mode, the gallery mode. You pick a wrestler, and you watch her stretch. You can pan the camera around however you like and zoom in and out. So, have fun doing whatever you plan on doing in this mode.

Here’s the smell trivia for you if you don’t press any of the buttons in this mode. The wrestler will start getting interviewed and start answering random questions. This is cool if you want to find out more about the wrestlers.

So, how do you play Clad Rumble Rose? 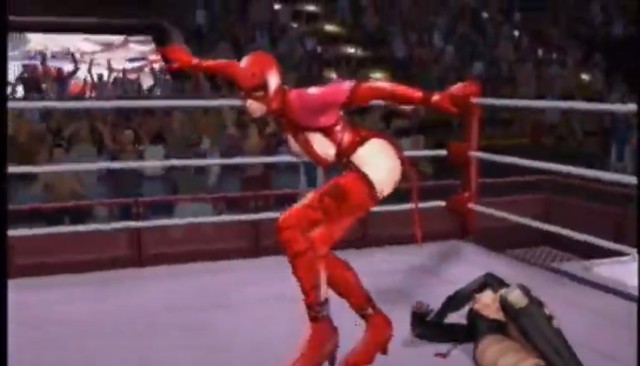 This game was created by Yuke’s and UQ, having experience with wrestling games. The game mechanics are pretty similar to those early ps2 WWE games. There are your typical wrestling mechanics here: run, strike, grapple, submission, and climbing the turnbuckle. Also, there’s a block button which can be comboed with the triangle or square button to reverse moves.

To win a match, you must either beat down your opponent enough to get a three-count pinfall or make them submit. Submissions are kind of cheesy in this game, though. You could just put someone in the same submission hold a few times and get an easy win. Pins can be a bit harder, though, but luckily, there are some big moves you can do to help beat up your opponent.

As you fight, your meter at the top will rise. Once the bar is filled, you have now obtained a finisher. You can pull off an awesome-looking killer or lethal move by pressing L1 when the opponent is in the right position. Also, while fighting, you’ll notice that you or your opponent Wallace will have a heart meter that gets filled after certain moves. You don’t want to see this meter get filled on your end. If the character’s heart is filled, they start blushing and get all embarrassed.

It’s kind of creepy and makes me feel cringe. So, what’s there in this state? You have a short amount of time to use one of your finishers. For humiliation, hit L2 in the right position to activate it. That’s pretty much it for matches. You’ll only ever fight in one-on-one singles matches.

Well, there is one other match, a mud match. In mud matches, our femme fighters must fight in bikinis while drenched in mud. It’s supposed to be mud, but it doesn’t look like it. But gosh, darn it, if that’s not the best mud effects I’ve ever seen on a ps2 game?

The concept of winning a match here is the same as in the other single matches. The only difference is, of course, the fan service and the fact that you can climb up there. You’ll see this match show up in story mode, and you can also choose in an exhibition mode.

In the exhibition, there are three different match types; the standard singles match, the mud match or a title match. There are also a few match types in story mode. With all said and done, is Rumble Roses a good or bad game?

Is Clad Rumble Roses a Good or Bad Game?

When it comes to the gameplay, it isn’t deep, and the controls could feel a bit stiff at times. However, you can pull off a lot of cool wrestling spots. They ripped off some of the moves right out of SmackDown. Here comes the pain, and there are also plenty of original moves. A lot of them look freaking awesome.

Speaking of visuals, the game itself looks very appealing. All the females look great, and the arenas look good too. Rumble roses do suffer from quite a few things.

The game lacks different match types. They don’t need cage matches or ladder matches. Maybe some tag-team matches, triple threats or four-way dances. It would have been nice to mix up the gameplay – it’s only single standard matches or nothing!

The story mode is fine, but my gut says it is hard to watch these cut scenes. The voiceover is awful. Overall, the gameplay is mediocre. The amount of content is subpar, but at least it looks pretty, which I guess was the purpose of the game in the first place. How this game appeals to people depends on the person themselves. Honestly, I love wrestling, but I’m not a big fan of super sexy polygons. After playing games like Bayonetta Dead or Alive onii-chan bara, I can certainly tolerate it if you like wrestling and busty girls.

I don’t feel like Rumble roses is a hidden gem, but it’s not a bad game. It just doesn’t do enough to keep you invested in the long run.

While the action has all the elements, the wrestling feels thin, with not as many options for attack. You will perform mostly the same moves until your opponent is weak enough, then go for the pin or submission. The game is clearly more focused on style rather than substance. With the limited game modes and simplistic wrestling, this may be the only game I know that may be more enjoyable watching than actually playing. The girls are hot, but the wrestling is shallow.