Chris Hemsworth Family Members and Net Worth 2019 – Chris Hemsworth was born on August 11, 1983, in Melbourne, Australia to Craig Hemsworth and Leonie (née van Os) as their second child among three sons. He has English, Irish, Scottish, and German ancestry.

His father is a social-services counselor while his mother is an English teacher. His parents raised him and his brothers in Melbourne and in the remote interior of Australia called Outback, in Northern Territory.

He studied at the well-known coeducational government secondary college ‘Heathmont College’ in Heathmont, Victoria. After a few years, his family relocated to the south-southeast of Melbourne, Victoria, in an island called Phillip Island.

Early 2010 saw him dating Spanish actress Elsa Pataky and they married in December that year over the Christmas holidays. The couple is blessed with three children – a daughter, India Rose, who was born on May 11, 2012, and Sasha and Tristan, their twin sons who were born on March 18, 2014.

Chris Hemsworth can easily be called “a perfect family man” because he is a great husband and father and in addition, his dating list is very short. Previously to his current wife Elsa Pataky, he was noticed in the company of just one woman – an Australian actress Isabel Lucas. They dated in 2005-2008. After their breakup, Chris was alone for about 2 years, and then met Spanish actress Elsa Pataky, who was 6 years older than him. He proposed to Elsa after just 3 months of relationships, and they tied a knot in December 2010. Now two actors seem really happy together. They are the parents of three beautiful kids.

Elsa and Chris’s first child was born in May 2012. Thor actor confessed to his fans, that he was close to crying from happiness when he took a blue-eyed girl in his hands for the first time. His wife Elsa told, that she was happy to become a mother, too, but at the same time, she appeared in the center of “family-career” conflict. She wanted to stay by her daughter’s cradle, and at the same time, she planned to continue the career of an actress. Finally, she made a compromise and appeared in “Fast & Furious 6” alongside hot Vin Diesel.

India Rose is not a little girl anymore. She has already turned 6, and she is a school pupil as for now. India resides with her mother and father in Australia. She speaks not just English, but also Spanish, which is her mother’s first language.

Two years after the birth of their daughter, Chris and Elsa became parents for the second time. They welcomed two twin boys – Tristan and Sasha. To care about her newborn boys, Pataky made a one-year-pause in her career. But then she returned to work and appeared in “Furious 7” and in “12 Strong”. In spite of a tough schedule, both stellar parents try to spend the major part of the year at home with their sons. “Parenthood changed me for better and gave me a perspective”, Chris told in his interview.

Chris’s followers, who watch his pics with his parents from time to time, never get tired to admire his hot father. Mr. Craig Hemsworth looks much shaped and has the same huge biceps, as Thor actor.

He currently resides in Australia with his wife Leonie. They live not far from his son Chris, daughter-in-law Elsa Pataky and their three grandchildren. He is a social worker, and during many years served as a social counselor.

Chris is very close to his mother Leonie and posts their common pics in social media from time to time. The actor’s mother looks very youthful, so obviously, Chris’s good looks come from his great genes.

Leonie is a wonderful woman, who raised three boys. In addition, she worked as an English teacher at a local school.

Later she retired and joined her husband in his work at the Australian Childhood Foundation. By the way, our today hero sent a fat paycheck to the fund, too. “My parents created a great atmosphere in our house, and I grew up in love and care. I want to help kids, who were not so lucky”, the actor said.

He added that he loves and respects all strong independent women due to his mother, who served as a role model for him. And it was Leonie, who convinced Chris that he had to struggle for the role of Thor. She felt, that it would become her son’s big break. 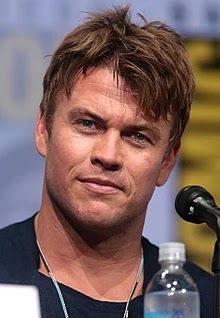 Luke is the oldest son in Craig and Leonie family. He grew up in the company of two brothers at Phillip Island, Australia. He was interested in acting since the earliest years, and after-school entered the National Institute of Dramatic Art to get professional training.

He started his career as a TV actor in a famous Australian soap opera “Neighbours”. He acted as Nathan Tyson, a football player, during 10 episodes. Luke’s most popular screen works include “Westworld”, the science fiction series, where he plays the main role, the movie “Hickok” and others. He is married to Samantha Hemsworth. They have three daughters together. Their names are Ella Hemsworth, Holly Hemsworth, and Harper Hemsworth.

Liam Hemsworth is a talented Australian-born actor, who created a bunch of natural male characters in popular movies and TV shows. In addition to his highly successful career, the man also gained recognition as on and off fiancé of Miley Cyrus. The couple started dating in 2009 after meeting on the set of “The Last Song” – a romantic drama, based on Nicholas Sparks script. They shared lots of sweet moment at red-carpet events but soon split. In 2016 the couple reconciled and engaged. They got married on December 23, 2018. Two stars arranged a secret ceremony, and during a long period of time the press and fans didn’t know about the change of their relationship status, till the couple’s relatives started to post their wedding pics on Instagram.