Chaka Khan Net Worth – Chaka Khan, also popularly known as the Queen of Funk, is an American recording artist. In her career, which has spanned more than five decades, she has won a total of ten Grammys.

Chaka Khan is an American singer-songwriter who has a net worth of $30 million. Chaka Khan is frequently referred to as the “Queen of Funk-Soul”. Khan is a 10-time Grammy Award winner whose career has spanned over four decades. She first shined on to the music scene in the 1970s as the frontwoman and focal point of the band Rufus, which were recognized for their strong R&B and funk sound.

In 1973, the group released their first self-titled album that included hits like Whoever’s Thrilling You and Feel Good. Their next album, Rags to Rufus, was released one year later becoming a smash both commercially and critically.

The same year, Stevie Wonder wrote the hit, Tell Me Something Good, for them, which sold more than a million copies. Subsequently, Rufus scored a Grammy Award for best R&B Vocal Performance by a Duo, Group or Chorus for the song in 1974. 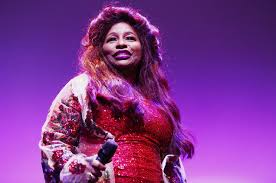 The rest of the decade, they continued enjoying success with no less than eight platinum albums. But in spite of their prosperity, Khan decided to leave the band and went solo in 1978.

Chaka’s first solo album became a global hit with the single I’m Every Woman, which scored a number one spot and eventually becoming Khan’s signature song.

However, the popularity of the mid-1980s was quickly followed by a period of decline throughout the 1990s. In 2007, Khan made a comeback as older, wiser but no less soulful singer with the Grammy-winning album Funk This. Since, she has reignited her career and re-confirmed her status as one of the most extraordinary and enduring voices in the history of soul.