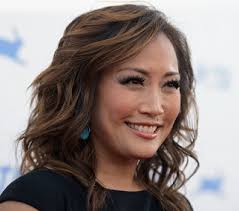 She rose to fame after she first introduced to herself as “Fly Girls” on the Fox sketch comedy series ‘In Living Color.’ 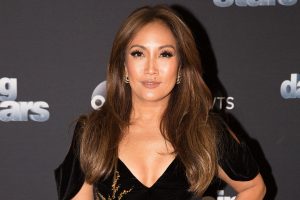 It was on January 5, 1968, in the United States, Honolulu, Hawaii that Carrie Ann Inaba was born. Of Japanese, Chinese, and Irish descent, she is raised the younger of two children by her parents, Rodney Y. Inaba and Patty Inaba.

When she was a child, her father had an altercation with someone in a bar which led to him being shot. As a result of this, she would grow up to be against guns, although her dad survived the incident.

Inaba got her education from Punahou School from where she graduated in 1986. Next, she moved to Sophia University and then the University of California where she obtained a bachelors degree in world arts and cultures. 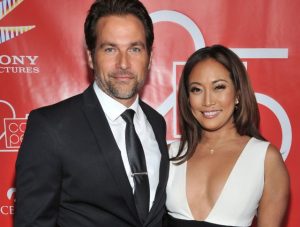 Although Carrie Ann Inaba has never had a husband as she has never been married before, she has been in a number of relationships in the past, with some steering towards the aisle before they ended.

On the set of So You Think You Can Dance in 2006, Inaba met Russian dancer Artem Chigvintsev. Although 14 years younger than her, the two clicked and began a relationship that would run until two and a half years later when it ended.

The then 41-year-old Inaba revealed that although the relationship with the then 26-year-old Chigvintsev felt good, they realized that neither of them was “the one” for each other.

In 2009, she began yet another relationship with Jesse Sloan which was pretty serious to a point that Sloan proposed to her on Live with Regis and Kelly in 2011.

According to him, he wanted to propose to her live so that their families and friends could witness it. Unfortunately, there was no wedding that followed as the engagement was called off in 2012.

Her next relationship was with actor Robb Derringer in 2016. 9 months into the relationship, the actor popped the question to which Inaba accepted. Unfortunately again, the engagement would be called off in 2017.

Carrie does not have kids of her own. However, she revealed in 2017 that she has plans to adopt a child even though it is something that she finds pretty much scary as someone who is single.

She began dancing since she was 3 years old and started her career at the age of 16 after winning a talent show. She later moved to Japan where she was trained in music.

Soon, she became a popular singer in Tokyo with songs such as “Party Girl”, “Be Your Girl”, and “Yume no Senaka” to her credit. More so, she also worked as a TV and Radio host.

By 1990, after returning to the States, she became a part of the backup dancers for the TV series, “In Living Color” until 1992. From here, she went on to perform with many singers including Madonna on her Girlie Show World Tour in 1993.

For someone as highly talented as the choreographer, actress, and television host, it will be expected that apart from her fame, Inaba will also have the fortune to show for all the hard work.

Well, she does, as she has a net worth that is estimated at $9 million. The UCLA graduate made her fortune from her works on TV including Dancing With the Stars through which she is rumoured to be earning as much as $1.2 million per season.