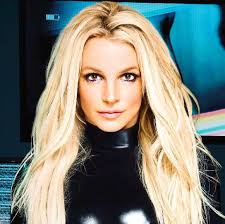 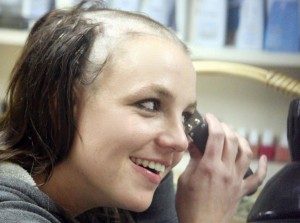 Britney Spears affects not only by her boundless talents, but also external appearance, constantly changing hair color and making original hair and hairstyles.

She began the career as a simple teenage girl, not able to make a beautiful hairstyle or makeup. Her hair were brown colour, her appearance was made by famous stylists of Europe for reaching her look breathtaking. She became a young lady with golden colour of hair with beautiful curls, and it had an incredible success. Then Britney became a splendid blonde, most of the clips and photo shoots singer was with such a wonderful appearance.

Britney wasn’t afraid to experiment with her hair. In 2000 strands fashion-ripple were popular and the fans enjoyed the view of the singer with such strands. Later she cut her hair to a medium length and made brown hair, making curls waves and major highlights. And again her image was blameless and attractive. When Britney Spears gave a birth to the second son she appeared before the public as a blonde and did her hair classic bob with a very short hair.

But this was not the limit of her imagination, in 2007 she appeared shaved without her amazing curls. After that, she had long psychological rehabilitation and people saw the brunette singer.

Many discusses about her unusual haircuts and hair colours made the name of the singer at the hearing. The year 2012 is marked by the appearance of a new creative technique of staining the hair colouring. This event is not passed by Britney, she took advantage of the new technology and showed the world her hair, which were pink and turquoise.

Only in 2014 Britney Spears three times changed hair color, and now decided to get a haircut. Britney Spears was a brunette, platinum blonde and went with red hair. Her new experiment is bob haircut. Her new hairstyle she presented to the audience at the launch of her new line of underwear in Oberhausen in Germany. The singer came to the event in a white suit, on the background of the image her new hairstyle looked very bright. Surrounding noted that haircut really suits for Britney. 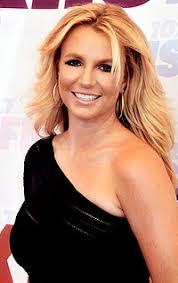 Britney Jean Spears is a famous American pop star who will go down in the history as one of the greatest pop artists from the west. She was brought up in Kentwood, Louisiana and was always interested in performing arts. She was only 8 when for the first time she was taken to ‘The Mickey Mouse Club’ audition and it was at the second attempt that she got a role in the show.

From there onwards, Spears’ talent was recognized by various agents and labels. Her debut album ‘…Baby One More Time’ came out in 1999 and it became an instant hit all over the world, making Spears’ the most popular and successful teenage solo artist in the world. From there onwards she came out with six other successful studio albums and the eighth one is ready to come out by the end of 2013. 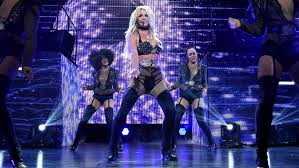 In 1997, Spears was appointed by the senior vice president of A&R to work with the producer Eric Foster who shaped her voice into more of pop style and her first album was recorded in Cheiron Studios, Stockholm, Sweden. In 1999, her debut album ‘…Baby One More Time’ was released and it topped the Billboard 200 chart as soon as it came out. Its title track ranked at number one at Billboard Hot 100 and it became the biggest selling album by a teenager.
In 1999, with her increasing success all over the world, Spears appeared on the cover of Rolling Stone in a sexual portrayal. A lot of people and associations condemned that but Spears maintained that there was nothing wrong with it.
In 2000, Spears’ second studio album ‘Oops!… I Did It Again’ was released. It broke the record of highest debut sales by any solo artist. Its title track did exceptionally well in Australia, New Zealand, UK, etc. she did the tour for the album in the same year.
In 2001, she signed an 8 million dollar deal with Pepsi and co-wrote a book with her mother, ‘A Mother’s Gift’. Her third album ‘Britney’ was released and reached at number one position on the Billboard 200.
In 2002, Spears acted in a Hollywood movie called ‘Crossroads’, which did not do very well but her performance was appreciated by some of the critics. The movie was made under the budget of 11 million dollars and grossed 57 million. In 2003, her fourth studio album ‘In the Zone’ was released. She co-wrote most of the songs of the album and also co-produced it. The album sold at least 10 million copies all over the world. It had the Grammy winning number ‘Toxic’ in it.
In 2004, Spears came up with an album called ‘Greatest Hits: My Prerogative’. It was a compilation of her great hits from over the years and also had a hit version of Bobby Brown’s ‘My Prerogative’. In 2005, Spears released her first remix album ‘B in the Mix: The Remixes’. The album sold a million copies all over the world. In the same year, she appeared on the show ‘Will & Grace’, in the episode ‘Buy, Buy Baby’.
In 2007, she released ‘Blackout’ which sold 3 million copies all over the world and won Album of the year award at the MTV Europe Music Awards. She performed on ‘Gimme More’ at MTV VMAs in the same year. In 2008, her sixth studio album ‘Circus’ was released and became a number one in Czech Republic and Canada. She became the youngest female artist to have 5 of her albums on number one in the ‘Guinness Book of World Records’.
In 2011, she released her seventh studio album ‘Femme Fatale’, which ranked at number one in US, Australia, Canada, etc. In the same year, she toured for ‘Femme Fatale’ and received positive reviews from the critics for it. Her eighth studio album, Britney Jean, was released on 3rd December 2013. She re-launched her website in September 2013 and released one of the tracks ‘Work Bi tch’ from her promised album. She also did a song for ‘The Smurfs 2’ called ‘OOH La La’.

Britney Spears married her childhood friend Jason Alexander in Las Vegas, but the union was annulled two days later. She then got involved with backup dancer Kevin Federline. At the time, Federline’s girlfriend was pregnant with their second child. Spears’ relationship with Federline only intensified with the media’s scrutiny of her private life.

Britney Spears experienced some troubles in her professional life around this time. She had to undergo surgery to correct a knee injury, forcing her to cancel the last part of her tour. Spears and Federline married on September 18, 2004, in Studio City, California.

Shortly after her wedding, she released Greatest Hits: My Prerogative. Britney Spears covered the Bobby Brown hit “My Prerogative,” which seemed to be her way of talking back to her critics and lashing out about the media frenzy that continually surrounded her. The recording sold more than 5 million copies, although it wasn’t as successful as In the Zone.

Despite her declining sales, Spears seemed content. She and her husband announced that they were expecting their first child together in April 2005. “I find being pregnant empowering. I think it brings out a pure side of you,” Spears told People magazine. However, despite the public fascination with the young couple, few people tuned in to catch a glimpse of their 2005 reality show, Britney and Kevin: Chaotic, which told the story of their early relationship through personal videos. That September, the couple welcomed son Sean Preston. 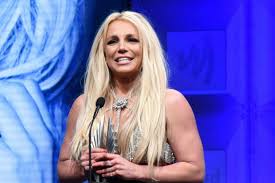