Bono Net Worth – Paul David Hewson, better known by his stage name Bono, is an Irish singer, songwriter, businessman and philanthropist. Hewson is best known as the lead vocalist and primary lyricist of rock band U2. He is the 2nd richest rock star in the world.  As of 2019, Bono’s net worth is estimated to be roughly $700 million dollars. 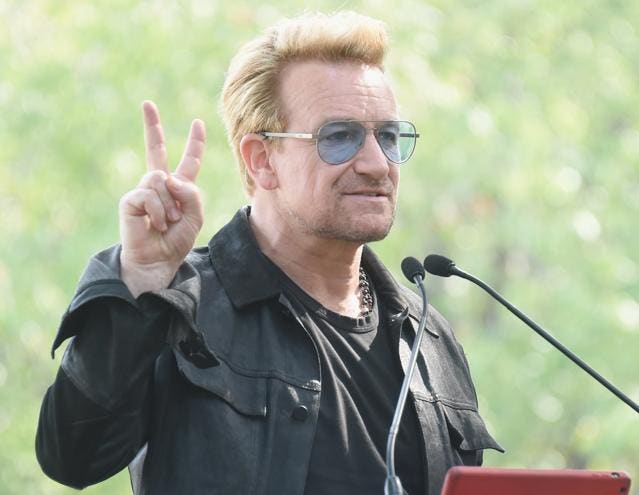 Paul David Hewson was born in Dublin, Ireland on the 10th of May, 1960. He is the son to Brendon Robert Hewson and Iris. He and his younger brother were raised in the Northside suburb of Finglas and the duo regularly attended the Church of Ireland services with their mother.

Hewson joined the band u2 in 1976, where his peers gave him the nickname, ‘Bono Vox’, meaning ‘good voice’.

Hewson began his musical career when he joined the rock band U2. He became the lead vocalist, and the band began touring and released its first album, ‘Boy’ in 1980. Seven years later, they finally gained international acclaim with their sixth album, ‘The Joshua Tree’.

The 2004 album ‘How to Dismantle an Atomic Bomb’ brought the band both commercial success and critical acclaim. The tracks ‘Vertigo’ and ‘Sometimes You Can’t Make It On Your Own’ peaked the Billboard countdown and also won the band several Grammy Awards.

In 2005, alongside with his wife, Bono established ‘EDUN’, a mission to substitute sustainable employment in developing areas of the world. On one such occasion in 2006, he began working with the band ‘Green Day’ to record a cover of the Skids, ‘The Saints Are Coming’.