Bill Gates Family – William Henry Gates popularly known as Bill Gates is a successful businessperson from Seattle, Washington. He dubs as the principal founder of Microsoft and its chief executive officer (up to 2000). He is an American humanitarian, philanthropist, author, investor, and business magnate. While in Microsoft, he was the chief software architect, CEO, and chairperson, as well as a large shareholder until 2014.

Bill Gates is rather a reclusive man who keeps his family off the limelight. His immediate family includes his wife, a well-known philanthropist, three children, two sisters, and his parents. He comes from a fairly mixed ancestry with his family tracing their roots back to Irish, German, and English descent.

This Christian family follows the protestant denomination. This family is very much involved in charity having founded the Bill & Melinda Gates Foundation. In early 2014, he stepped down as Microsoft’s Chairman to focus on his charitable endeavors.

Bill’s father, William H. Gates, is a retired attorney born in November 1925. His late mother, Mary Maxwell, was a schoolteacher and a businesswoman.

William and Mary got married in 1951, and they remained married until Mary’s death in 1994. They had three children: Kristianne, Bill, and Libby. 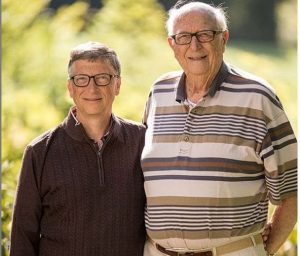 William Gates is the co-founder of Shidler & King Law firm that later changed its name to K&L Gates following a merger. He retired from the firm in 1998.

He has also authored a book called Showing Up for Life: Thoughts on the Gifts of a Lifetime. In 1996, William Gates married his second wife, Mimi Gardner Gates. Siblings Bill grew up in an upper-class family with two sisters, one older and the other younger than him.

The elder one, Kristianne Blake, is a CPA practicing in personal financial and tax planning. Before starting her own practice in 1987, she was a partner in Deloitte and Haskins & Sells. She serves on the Board of Regents in the University of Washington, and she is also a trustee of the Russell Funds.

The younger one, Elizabeth Gates, serves in a number of charity organizations in various positions. She is also a well-known philanthropist.

Bill Gates is married to Melinda. She comes from Dallas having been born in 1964. Just like her husband, Melinda has been very passionate about computers.

She started using Apple 11 at the age of 14 years, and despite spending most of her time playing computer games, she devoted to understanding programming languages before she could graduate with a degree in computer science and economics from the Duke University. 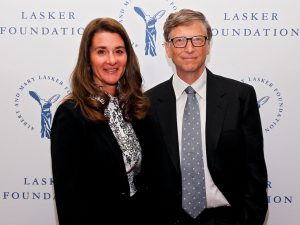 The couple has three children together.

Their first child and daughter, Jennifer Katharine was born in 1996. She is an equestrian rider who is a strong competitor in horseback riding. She was part of the 2018 Longines Global Champions Tour.

News had in 2017 that Katherine was dating a Muslim, Nayel Nassar whom she intends to marry, drawing attention to her father’s religion as well as his stands on interfaith marriage. But the distraction has in no way affected the relationship between the two.

Gates second child and only son, Rory John was born in 1999. Despite his wealthy background, Rory was not allowed to use a mobile phone until he was 13.

Bill and Melinda’s third child and second daughter Phoebe Adele Gates was born in 2002. The family resides in Seattle on the shores of Lake Washington.

In conclusion, he lives a quiet life outside of Seattle in a massive US$120 million estate. Bill Gates is continually making the world better with technological advancements through his company and supporting those less privileged through donations. 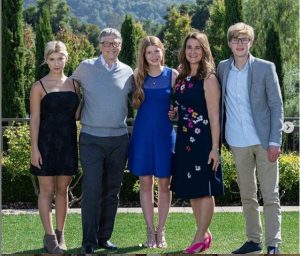 This goes on to show what an incredibly noble businessperson and family man he is. It is no wonder masses admire and respect him.

Biography, Career and Net worth 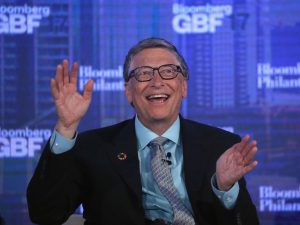 World class business leading light Bill Gates started out like every other normal business minded man would go about a business. For Gates, his billion dollar PC software company which he started in 1975, with friend Paul Allen, was more of passion than profit.

For those not in the know, Bill Gates is the co-founder of the world’s largest software company – Microsoft. Two friends; Bill Gates and Paul Allen remained faithful to their passion and formed a company that would place them in the category of the richest men in the world.

Gates held the position of the chief executive officer until in 2000 when he handed over. He has remained the chief software architect since then

Bill Gates had a strong passion and skills in mathematics when he was young. He scored 800 points (the highest points at the time) in an intelligence test, the mathematical part. In spite of this, his parents thought he would make a good lawyer.

He loved computers and spent so much time learning and writing programs that could make the teletype machine at his school perform interesting tasks. Together with one of his friends, Paul Allen, Bill Gates identified the weak area of the machine and that is how they were able to make the machine show computer time.

When Generic Electrical, the company that had supplied the school with the teletype machine noticed this, Paul and Bill were barred from accessing the computers from a while but when the company realized how important it was to secure its computers, it asked Bill and Paul to help them in identifying the security loopholes.

At the age of 15 years, Bill Gates created software for optimizing traffic and sold it for $20,000. His parents were concerned that money would spoil him; hence, they prohibited him from doing computer projects. However, they lifted the ban when he joined a job at Bonneville.

The boy revealed his real talent while studying at Lakeside school, graduating from high school in 1975, Bill Gates proceeded to Harvard University where he continued to develop his skills.

Bill who was less interested in academics focused more on computers to the extent that Allen his friend suggested he opted out of school to start his own business. It was still 1975 and the two friends founded the company which they named Micro-Soft at the time.

After a partnership agreement with IBM in 1980, Microsoft created and delivered a PC DOS operating system for the company and soon grew to popularity. In 1989, Microsoft then came up with Microsoft Office which was a harmony of different packages like Microsoft Word and Microsoft Excel.

Co-founder Gates remained the CEO of the company until 2000 when he stepped down. He then created the chief software architect position which he still holds.

Gates became a millionaire at 31 after Microsoft went public with an IPO of $21 per share in 1986. Only a year later, he became a billionaire when Microsoft’s stock increased in value, reaching up to $90.75 per share.

The fact that Bill Gates is one of the richest people in the world makes everyone curious to know how much he makes. Surprisingly, most people are not concerned about his monthly returns, but daily and some even per second.