Bella Hadid Siblings and Net Worth – It’s not an easy thing to be a younger sister of the rising talent in modeling area Gigi Hadid. Very often Bella and Gigi are compared, but the girls insist, there’s no competition between them.

Bella Hadid Siblings and Net Worth 2019

Bella is the second child of super-beauty Yolanda and her super rich ex-husband Mohamed Hadid. She was born in Los Angeles on the month of october 9, 1996 and attended Malibu High School. Then Bella studied photography at Parsons School of Design, but left it to become a model.

As for now, she is known as an ambassador of TAG Heuer and Bulgari’s accessories. In addition, she posed for Victoria’s Secret catalogue.

Bella Hadid is not just a popular model, but also an Instagram star with more than 14 million followers. In 2016 Bella was ranked as Model of the Year.

Bella Hadid is single now. Previously she dated a popular singer The Weeknd.

Anwar is the only son of Mohamed and Yolanda Hadid. He was born in Malibu, CA. Currently Anwar is 19 years old. He followed his sisters’ footsteps and started career of a model. The boy is signed with IMG Model Agency.

He started modeling two years ago, when the boy had the Vogue magazine cover. Currently he cooperates with reputable brands, but he doesn’t take modeling too seriously. In future he plans to follow his father’s footsteps and become a business mogul.

Marielle is the oldest kid of Mohamed Hadid. She is Gigi’s older half-sister. Marielle is a mother of two kids Coco and Colton and a business woman. She works in real estate area. According to her father’s words, she is successful in everything she is doing.

Alana is the second daughter of Mohamed and older half-sister of Gigi Hadid. She is a reputable fashion designer, who cooperates with lots of famous fashion gurus. In addition to design business, Alana is a personal shopper. She develops her line of T-shirts, named Current Moji. Alana is in good terms with Gigi and Bella and their mother Yolanda. 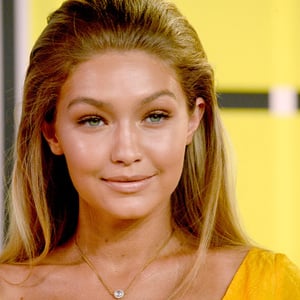 Gigi Hadid is an American model and reality television star who has a net worth of $29 million. Gigi Hadid is the daughter of Real Housewives of Beverly Hills star Yolanda Foster and real estate developer Mohamed Hadid.

Gigi was born on April 23, 1995 in Los Angeles, California and grew up in Santa Barbara, California. Her given name is Jelena Noura Hadid, but she is called “Gigi” by her family and friends. She started her modeling career at the age of 2 after she was discovered by Paul Marciano of Guess. She started modeling with Baby Guess for a short time but stopped so she could concentrate in school, she eventually got back into modeling and continued working with Guess.

In 2011, she made her debut as an actress when she starred in a short movie called, Virgin Eyes, but she is best known for being a Sports Illustrated model and for her appearances on The Real Housewives of Beverly Hills. Her mother Yolanda, who is a former model herself, is currently married to music producer David Foster. Foster has won 16 Grammys and is credited as discovering many artists including Josh Groban, Michael Buble and Celine Dion.

Gigi’s birth father Mohamed was born in Palestine and made his fortune developing Ritz Carlton hotels and other high-end real estate all over the world. Gigi has younger sister named Bella who is also a model. Gigi is one of the highest paid models in the world. She makes $9-10 million per year thanks to contracts with companies like Maybeline, Evian, BMW, Versace and Tommy Hilfiger.