Andre The Giant height – André the Giant was a true gentle giant. Despite having achieved tremendous success as a wrestler, he remained soft-spoken and humbled by all accounts. It has been revealed by his close friends such as Arnold Schwarzenegger that he never allowed anyone else to pay the bill when they were eating out. In fact, he once lifted and deposited Arnold on top of the car, when he quietly tried to pay the bill. 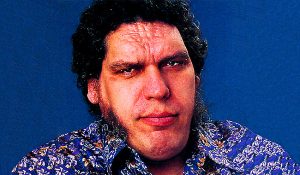 André the Giant was born André René Roussimoff, on May 19, 1946, in Molien, France, to Boris and Mariann. His family worked on the farms and they barely made a living. André showed signs of gigantism very early in his life. Gigantism is an ailment of growth hormones that allows the body to grow beyond normal. He hit the height of 6 feet 3 inches when he was 12 years old, and he never quite stopped growing even after that. This was a strange occurrence, as he had shown no signs of hormonal imbalance when he was a kid.
He started attending a local school at the age of 6. He was academically brilliant, with math being his favorite subject. He also happened to be good at sports. He was part of the school soccer team. He mostly played as a goalkeeper, as it was almost impossible to get the ball past him. By the time he was 10 years old, he stood at 6 feet. Soon, his parents began worrying about him and feared that there was something wrong with their son.
The family owned their own farm, and when his father noticed that André was able to do the work of three men all by himself, he made him quit school. André, too, believed that there was no point in studying any further, as studies were of no use when it came to farming.
However, after a few years of working on his family’s farm, André felt that he was not cut out for it. He wished to do something more challenging in life. At the age of 17, he moved to Paris. There, he met a wrestling promoter who thought André had a bright career in professional wrestling. André agreed, and hence began a career that made him one of the most recognizable wrestlers on the planet.

He fought for a few months in Paris and places around the city, and this brought him a lot of popularity in Europe. A Canadian promoter named Frank Valois got in touch with him in the mid-1960s. Soon, Frank became André’s representative, and with him, André traveled around quite a lot and made a good name for himself in the UK, Germany, Australia, Africa, and New Zealand.

In 1970, he entered the Japanese wrestling scene and became a massively popular wrestler, fighting for the ‘International Wrestling Enterprise.’ He performed brilliantly in both one-on-one matches and tag-team matches and soon emerged as a tag-team champion. He returned to Canada in the 1970s and soon defeated Buddy Wolfe in New York’s ‘Madison Square Garden.’
In 1980, he started a feud with Hulk Hogan, in which he appeared as a hero and Hogan was termed a villain. André won several matches that took place between Hogan and him, and the feud continued in Japan all through the early 1980s.
In 1982, Vince McMahon Jr. took over the ‘WWF.’ He needed a few new wrestlers to expand his company, and André was one of the very first wrestlers that he signed up. He also made several exceptions for André. After he signed a professional contract with André in 1984, he allowed André to fight in the ‘New Japan Pro Wrestling’ bouts.
One of André’s most dangerous feuds was the one with Killer Khan, also known as the “Mongolian Giant,” in the early 1980s. “Big John Studd” was another fighter with whom André had a long-standing feud. However, André ended up losing his matches by disqualification. Nobody was able to pin him down. The two of them fought several matches all over the world, many of which were held in Japan and the US.
In April 1986, André participated in a “battle royal” and defeated 20 men to win the match. The men that he defeated included several heavily built ‘National Football League’ (NFL) stars and wrestlers. The last man to be eliminated by André was Bret Hart. André started facing health problems in 1986 and quit wrestling for a few months. He returned later in the year and started fighting wearing a mask and with the new alias “Giant Machine.”
In 1987, his rivalry with Hulk Hogan was refueled when André was awarded the tag of the “only undefeated wrestler in wrestling history.” He had lost all of his matches via disqualifications or other causes. No wrestler had been able to pin him down or torture him to submit a match. At ‘Wrestlemania III,’ André challenged Hulk Hogan for a championship match for the ‘WWF World Heavyweight’ title, which Hogan had held for three years.
Hogan accepted the challenge and won the match. He body-slammed André and pinned him down in what later became famous as the body-slam that was “heard around the world.” It is said that André had agreed to give the match away because of the ongoing health problems that he was facing. In February 1988, André finally defeated Hogan to win the ‘WWF World Heavyweight Championship’ title and later sold it to Ted DiBiase. 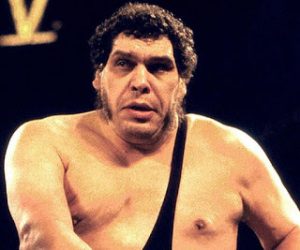 Toward the late 1980s, André entered into feuds with Jim Duggan and “The Mega Powers.” He later started a feud with Jake “The Snake” Roberts. Jake had a pet snake and utilized André’s fear of snakes to his advantage, by hurling his snake at him. After fighting for ‘WWF’ for a few more years, he turned to Japan. He spent the last few years of his life in the early 1990s fighting in the ‘New Japan Pro Wrestling’ bouts.
André also acted in several films in the 1970s and the 1980s. He was offered roles that suited his tall frame. Some of his noteworthy films were ‘The Greatest American Hero,’ ‘The Fall Guy,’ and ‘Zorro’ (1990). His most popular role remains that of ‘Fezzik,’ in the film ‘The Princess Bride.’

André the Giant was married to Jean Christensen and the couple had a daughter named Robin.
André was dubbed as the “greatest drunk on Earth,” as he once drank more than 41 liters of beers within six hours. It was also reported that he once drank 127 beers in a hotel bar in Pennsylvania and passed out in the lobby. The hotel staff were unable to move him, so they decided to leave him there until he woke up.
André passed away on January 27, 1993, in his hotel room in Paris, due to congestive heart failure. He was in the city to attend his father’s funeral.