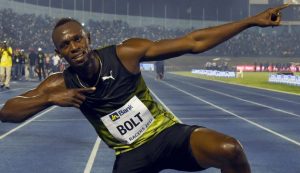 Usain St Leo Bolt, now famous as Usain Bolt was born on 21st August 1986 in Sherwood Content, Trelawny, a small town of Jamaica. He grew up with his parents Wellesley and Jennifer Bolt. He also has two siblings, a brother Sadiki, and a sister Sherine.

Usain attended ‘Waldensia Primary’ for his primary education. By the age of twelve, Bolt became the school’s fastest runner in 100 meters distance. Bolt later moved to the ‘William Knibb Memorial High School’, where he started playing cricket but his coach Dwayne Jarrett encouraged him to focus his energy on improving his athletic abilities.

Soon after which he participated in 200 meters racing event in school and won his first silver medal at high school championship.

Bolt competed in 2002 World Junior Championships, his first international participation, in Kingston, Jamaica, where he won the 200-meter dash, making him the youngest world junior gold medalist ever.

You just have to see him to know that he is way above the average male height. Usain Bolt’s height is about 6 ft 4 inches, and he weighs 94kg which balances his height. His body measurements, starting from his chest is 46 inches, waist 34 inches, and biceps 16 inches. 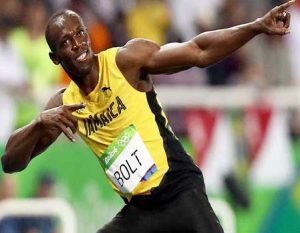 Usain Bolt became a professional athlete in 2004 under the supervision of Fitz Coleman. He started with the CARIFTA games which took place in Bermuda. Bolt became recognized as the foremost junior sprinter to have run the 200 meters race under twenty seconds. He was among the Jamaican squad who took part in the 2004 Junior World Championship, even though he had a hamstring injury.

Bolt courageously took the bull by the horn by attending the 2004 Athens Olympics where he broke a new record. However, he got retarded by a leg injury and was removed in the first round of the 200 meters race with a regrettable time of 21.5 seconds.

The year 2005 indicated a good beginning for Usain Bolt because he got a new coach named Glen Mills. Mills made Bolt change his attitude towards athletics. He began to train with Mills in order to get himself ready for the forthcoming athletics; collaborating with notable sprinters such as Dwain Chambers and Kim Collins.

The year actually started well, and by July he created another record. He further partook in the 2007 World Championship held in Osaka, Japan; attaining a silver medal. The silver medal relay team has Usain Bolt as one of its members, alongside Asafa Powell, Nester Carter, and Marvin Anderson in the 4 ×100 relay race. 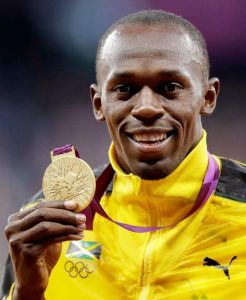 Bolt earned himself the Jamaican Sportsman of the Year in 2008, 2009, 2011, 2012, and 2013. He was recognized as the Commander of the Order of Distinction, which automatically enables him to make use of the post-nominal letters

In the year 2015, Usain Bolt was honored by AIPS as the Male Artiste of the Year. BBC also conferred him with BBC Overseas Sports Personality of the Year. He was further recognized as Laureus Sportsman of the Year.

With Usain Bolt’s net worth estimated to be $90 million, he is one of the highest paid Olympians of all time, coming just in front of Michael Phelps.