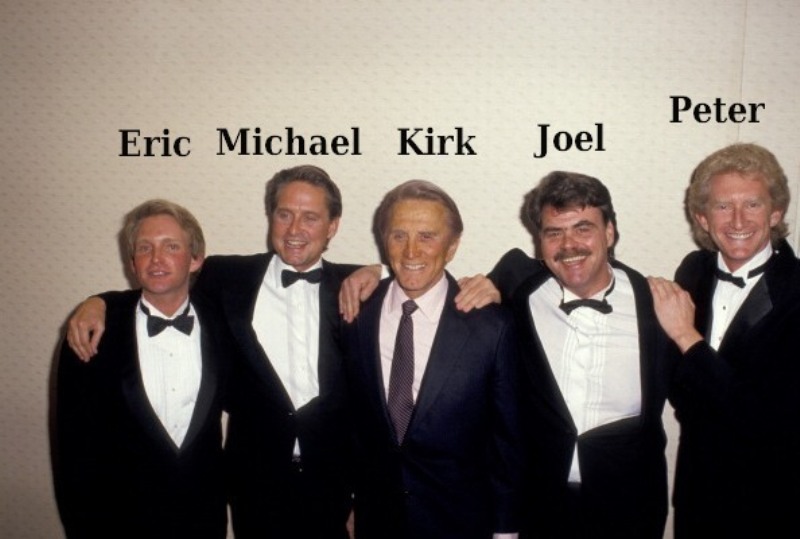 The first son of Kirk Douglas and Diane Dill doesn’t need any introduction. At first Diane wanted to name a boy after his father, but Kirk insisted his newborn baby needed his own name. Thus, a famous movie star was named Michael Kirk Douglas.

When the boy turned 5, his parents divorced. That was a hard period in Michael’s life. Although his talented and busy father Kirk tried to stay in touch with his sons Michael and Joel, according to Kirk’s words, “they were not so close”.

At the same time, Michael and Kirk have a lot of common memories. For example, when Michael turned 16 and his father was 45 they arranged a swimming competition in a pool and Kirk did everything to defeat his teen son.

When Michael got interested in acting, his father did his best to dissuade his son. “I wanted him to get some serious profession – of a doctor or a lawyer. When he asked me to see his first play, I told that it was terrible”, Kirk opened up in one of his interviews. But in spite of father’s forbiddance Michael Douglas continued acting and has become a star. Now his movies are watched and re-watched all over the world. Michael gave his viewers a string of strong and complicated male characters – Richard Adams in “The China Syndrome”, Gordon Gekko in “Wall Street”, Detective Nick Curran in “Basic Instinct” and many others.

Michael Douglas way on top was not full of roses. In 1980 he fell down while skiing in the mountains and got serious traumas. After the accident Michael had health problems and didn’t appear in new movies during 3 years.

But he returned in middle 1980s and played his best roles. For some of them the actor got prestigious awards, including two Oscars.

Michael Douglas inherited his natural charm from the popular father. In 2000 he got married a popular British actress Catherine Zeta-Jones, with whom he shares the same birthday – September, 25. Catherine is 25 years younger than her husband.

“I am so proud of him”, his father never gets tired to tell.

Joel is the second son of Kirk Douglas and Diane Dill. He was born on the next day after his mother’s birthday. Diane celebrated her 24th birthday, when felt that her baby is on the way. Several hours later she gave a birth to a cute boy in the hospital.

Joel was 4 years old, when his famous father left the family. Nevertheless Kirk tried to spend a lot of time with Joel and Michael.

Unlike his older brother, Joel didn’t choose acting as a profession. But he produced a number of films, including “The Jewel of the Nile”, where his famous brother played the leading role.

Joel was married 4 times. His latest wife Jo Ann Savitt was a daughter of a famous musician Jan Savitt. Jo Ann and Joel tied a knot in 1986 and spent 27 great years together. In 2013 Jo Ann died.

The third son of Kirk Douglas and the first son of Anne Buydens, Peter Vincent took his second name from Vincent Van Gogh, with whom his father had a common project. Peter is a talented film producer and an actor. In addition, he is a faithful husband (he has been together with Lisa Schoeder since 1991 and they welcomed 4 children).

Kirk Douglas told that he felt proud of his sons as all of them have become great professionals and great family men. Probably, Eric is the only son of a talented actor Kirk Douglas, who followed the wrong way.

Eric was born in 1958 in one of LA hospitals. He grew up in the family of creative rich parents. Eric attended Pitzer College and then continued his education in the Royal Academy of Dramatic Art.

Kirk Douglas youngest son made career of an actor and standup comedian. But he couldn’t develop his natural talent to the highest peak, because he was drug addicted and spent lots of energy on his terrible passion.

Eric Douglas resided in New York City. In July, 2004 he died from drug overdose. In his rare interview Eric Douglas used to say, that he had always felt pressed, comparing himself to his father and talented older siblings.