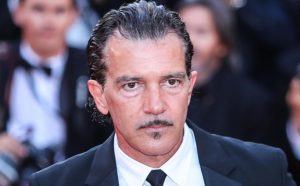 Antonio Banderas was born as José Antonio Domínguez Bandera on 10th August 1960. He was born in Andalusia, Malaga, Spain to José Domínguez Prieto and his wife, Ana Bandera Gallego. While his father worked as a Civil Guard Police, his mother was a school teacher. His parents raised him alongside his brother, Francisco Javier.

Growing up, Antonio had wanted to become a footballer and actively worked towards achieving the dream. But unfortunately, at the age of fourteen, he fractured one of his legs, a development that permanently halted his athletic ambition. Going forward, Banderas diverted his interest and passion to the performing arts. He subsequently joined the ARA School Theater in his hometown. He also later studied at the Malaga Superior College of Dramatic Arts. In 1979, he left Malaga for Madrid to expand his horizon in the field of acting, eventually earning a spot in the Spanish National Theater.

In 1982, Antonio Banderas began his professional acting career. He initially appeared in a series of films produced by famous Spanish movie producer Pedro Almodóvar who holds the credit of shooting him to the international screens.

The popular filmmaker had noticed Banderas while he performed with the Spanish theater, and cast him in a minor role in his 1982 comedy film, Labyrinth of Passion. He later became a regular cast in Almodóvar’s films, appearing in the producer’s Law of Desire, Matador, Women on the Verge of a Nervous Breakdown, Tie Me Up! Tie Me Down! between 1986 and 1989. 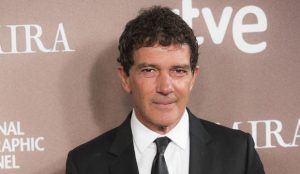 In all, it was his role in Tie Me Up! Tie Me Down! that earned him global popularity, shooting him straight into Hollywood in 1991. The following year, he debuted on the American screens in the 1992 drama film, The Mambo Kings.

Antonio Banderas married Ana Leza in 1987. After a nine-year-old union, the couple divorced (in 1996) without a child.

Prior to his divorce with Ana Leza, Banderas had met actress Melanie Griffith while they filmed side-by-side in Two Much (1995). Having been her staunch admirer before then, he seized the opportunity to kick off a relationship with her. They married the next year, precisely on May 14, 1996, following a heated romantic affair.

The couple on 24th September of the same year welcomed a daughter whom they named Stella del Carmen. The couple, however, divorced amicably in December 2015, citing irreconcilable differences. Antonio however, recently revealed in an interview that he will love Melanie until the day he dies, leaving everyone wondering what these “irreconcilable differences” standing between two lovers could be!

Banderas is, as of 2019, dating Nicole Kimpel, a Dutch consultant. She made her first public appearance with him at the 2018 Emmy Awards gala. His daughter, Stella Banderas is also training to become an actress. 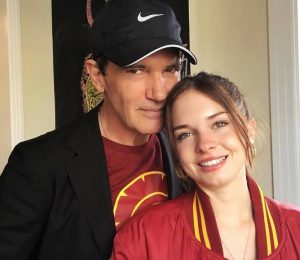